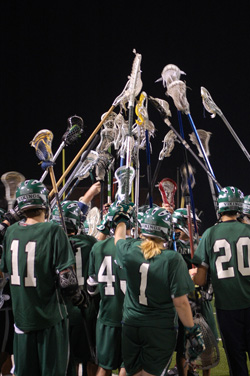 Maybe you weren’t expecting that. Maybe, like some others, you think of DVC’s lacrosse team as athlete wannabes, since they are, after all, not an actual intercollegiate athletic team, but, well, a club.

You’re in for a big surprise.

Consider their first team meeting. As told by one of the players, “None of [us] had much in common. There was one who wore tall tees and a flat brim baseball cap that matched his shoes; one brought his guitar with him and was dressed in a collared shirt and slacks; one looked like he could be an Abercrombie and Fitch model; and one looked like he bought all his clothes from Zoomies. Each face was surprised as…he looked at his prospective new team mates, thinking, “Oh God! I’m gonna play with them?”

But there they were. A bunch of guys who wanted to play lacrosse, who were determined that somehow, some way, they would play lacrosse at DVC.

Several more meetings took place, the players bringing other players and getting to know each other, discussing everything from coaches to jerseys, games to fundraising, club rules, dues, and paperwork. Each meeting reported two steps forward, and one new barrier.

One of the eventual leaders of the club had spoken with an influential PE instructor, who bluntly declared that starting a men’s lacrosse team at DVC would be impossible. Despite the setbacks, the club advisor, Terry Armstrong, continued to inquire about possibilities. One inquiry was made to Ralph DePew, the PE department chair, who responded, “I’ve been wanting to start a lacrosse class here for years,” and, after convincing his fellow faculty members, offered a Lacrosse class in the fall of 2008.

There were more delays, and soon the team had only one practice session before their first game at UC Santa Cruz. And of the 25 players enrolled in the class, only 15 were able to make that first Sunday game. They received their jerseys and shorts in the DVC parking lot as they left for the game. The team members barely knew each other’s names!

Out on the field they faced a 40-man squad that worked together with ease and grace. Still, by the end of the first quarter, the Vikings were up 2-1. That didn’t last, as the players became exhausted due to lack of conditioning and substitutions, and they lost 11-6. But they finished with their heads held high.

By the next spring, more players joined and the squad soon numbered 28. The Vikings compiled a 3-1 record in the first four games, losing only to WCLL Division I San Jose State. In the final game of the season, the team played and defeated UC Santa Cruz, Division II Champions and eventual WCLL tournament champions.

Then came another blow. The West Coat Lacrosse League wouldn’t recognize DVC lacrosse, wouldn’t consider them for inclusion in the league, and wouldn’t list games they played in the WCLL team schedules, but they mandated that DVC have WCLL officials (whom they were required to pay), and they charged DVC players year-for-year eligibility if they played during the spring season. 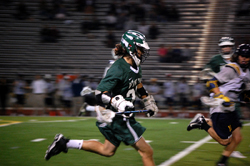 By that time, the beginning of the spring 2009 season, the Vikings had posted a 4-1 record against WCLL Division I and Division II teams, and they realized they had just used a year of eligibility for players who had played in those scrimmages. They also realized it was a sacrifice they were willing to make to get lacrosse established at DVC.

However, it also became clear to the players that games played during the fall season would not impact a player’s eligibility, so the team decided unanimously to play a full schedule in the fall and forego the spring season. And during that fall play, they would take on all comers—Division I, Division II, and anyone else who wanted to play DVC.

This worked out nicely for the team. They scheduled 16 games for the fall of 2009. By then, the Vikings’ enthusiasm, heart, and play totally “wowed” opposition coaches and teams regardless of the outcome of the game. Victories over Stanford University, University of Nevada-Reno and San Jose State “sent a shock wave down the San Andreas Fault to San Luis Obispo,” as one player put it. They had earned the respect of players and coaches from all across the region.

They had laid a solid foundation for lacrosse at DVC, and the club was going strong.

This fall, DVC’s lacrosse players scored another victory of sorts—this time in community relations. During the Pleasant Hill Community Service Day in September, the whole team and their coaches showed up at Gregory Gardens Elementary School and tackled projects throughout the school.

School Principal Cheryl Kolano said, “We were delighted to have the opportunity to work beside the lacrosse team. I enjoyed the enthusiasm and commitment of the team members, who worked clearing the fence line of brush and garbage, removing built-up dirt that was causing flooding in the hallways after heavy rains, and washing down the walls of our Parent and Infant program space. They straightened out planters, filled dumpsters with brush, and touched up murals that cover our outside walls. I can tell you they really kept us jumping.”

After the event, Kolano notified club advisor Terry Armstrong that she was very interested in encouraging families from the Gregory Gardens school to attend games at DVC.

“I see this as an opportunity to bring together parents from diverse backgrounds, including our families for whom English is a second language,” she said. “Lacrosse may offer an opportunity to share in the celebration of a sport that stretches beyond the current day traditional U.S. events. In a way, it balances the playing field for all of us.”

And as another fan summed up DVC lacrosse: “I am not sure that people GET how impressive DVC lacrosse actually is.”

You might want to go and see for yourself.