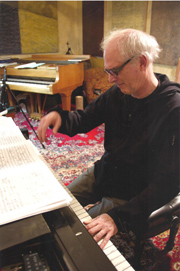 Calling it “like a cozy escape into a world oriented both outward and inward,” the New York Times’ Zachary Woolfe praised a concert given by DVC’s Jerry Kuderna as part of the Mano-a-Mano Piano Festival early this fall.

The concert was the first of three in the inaugural festival presented by the organization Composers Collaborative and its director, pianist and composer Jed Distler, at the Cornelia Street Cafe in New York.

Kuderna has been a part-time instructor in DVC’s music department since 2004, teaching Introduction to Music Literature. He considers himself a classical pianist, with a strong interest in the music of our time, and said “I seek to find the modern in classical literature, and classical in the modern.”

A pianist who performs widely in the Bay Area and is a favorite soloist with the Berkeley Symphony Orchestra (BSO), Kuderna began serious musical studies at the age of 9 with Antonia Brico in Denver, CO. He sang in the chorus of ‘Beethoven’s Ninth’ shortly after beginning piano lessons with her, and said, “It was the decisive experience of my young musical life.”

After attending Juilliard, Kuderna earned his Bachelor of Music degree at the San Francisco Conservatory where he met pianist/composer Robert Helps, who was teaching there. Kuderna continued studying with Helps at the New England Conservatory in Boston, where he earned his Master of Music degree. He received his Ph.D. from New York University in 1982. He said, “I also studied chamber music with the violinist Rudolph Kolisch, with whom I studied the works of Schoenberg, Berg and Webern, composers Kolisch knew personally and whose works he premiered.”  Kuderna taught at Princeton University and the University of Louisville prior to coming to DVC.

“Despite the lack of original compositions to my credit,” Kuderna said, “I developed a fondness for 20th Century music, and met Elliott Carter (who is still composing at 102!) and other major American composers. Since then I have performed most of Carter’s music involving the piano, including his ‘Piano Concerto’–which I had spent years working on and finally performed with the Berkeley Symphony in 2006. It was written in 1965 but had never been played on the West Coast. I also premiered Daniel Brewbaker’s ‘Piano Concerto’ on Sept. 12, 2011 with the BSO under Kent Nagano. That was memorable in the consolation the music offered after 9/11.”

While teaching piano in the early 1970s at Princeton University, Kuderna met two more composers who were on the faculty there, and whose music has become a specialty: Roger Sessions and Milton Babbitt.

“I eventually wrote my Ph.D. dissertation about Babbitt’s piano music, while I was giving first performances of his piano and chamber works” Kuderna said. “Part of my mission is to pass on to my students the rich legacy of ‘serious’ American music. I love playing Bach (I play piano/organ and direct the choir in a Lutheran church) and Beethoven and Chopin et al, but if invited to play in New York or Maui or Madrid, I will choose an all-American program. And usually the more challenging the program is for me (and for the audience) the better they like it!”

It was while teaching a class in the music building for Emeritus College that Kuderna first came to DVC. His goal here, he says, “is to raise the consciousness of undergraduates to the importance of classical music in their lives.”

“I am in the habit of dividing my classes into about 75 percent playing and 25 percent talking about the music,” he said. “I had been doing this weekly at various walk-in venues in downtown Berkeley and found that I could build a regular audience interested in following whatever my current musical interest might be. I found I could play a lot more repertoire this way, and do it in a much more engaging and less formal way.

“This is what I did at the recent New York concert, and it seemed to be convincing to the Times critic,” he continued. “My students at DVC react much the same way. If I ask them to write a response to a performance of mine in class, even of music unfamiliar to them, they often overwhelm me with their spontaneous insights into the music. This way the music becomes part of our shared experience.

“This is what I love about teaching undergraduates ‘music history,’” he said. “When they find the joy of music within, it’s worth more than any review I could receive.”

Kuderna lives in Berkeley with his wife, the artist Mari Marks.

To read the Times review of Kuderna’s New York concert, click on the following link:

Memorials and Reveries in a Cozy Cabaret Setting