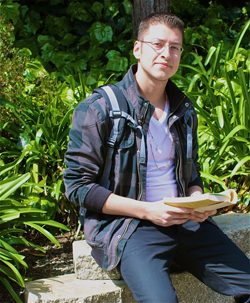 Anthony DeLuna grew up south of Houston in Lake Jackson, Texas, a small town where the biggest thing that happens is the annual Mosquito Festival, celebrating larger-than-life mosquitoes. Yes, mosquitoes. The only local celebrity was Selena, the singer who was murdered at age 23.

DeLuna dropped out of Brazoswood High School at age 16, and earned his GED at 18. He moved to Houston, but soon lost his job there, and with only a GED and very limited options, he was sleeping on a friend’s sofa with no idea what to do next. His life was going nowhere fast.

Then in June 2007 his mother called. Would Anthony like to join her and his sister on a road trip to California to visit cousins, aunts and uncles?

“There was nothing else going on in my life, so I packed for a two-week trip and set off,” DeLuna said. “We did the whole L.A. and Hollywood bit, then headed to a place called Clayton outside San Francisco, to visit with an uncle and cousins I had never met. We enjoyed ourselves all weekend, and then it was time to go. My mother was packing. I went to put my things in the car, and my mother said, ‘You’re going to stay.’”

What?? “I couldn’t believe my ears,” DeLuna said. “I told her my whole life was back in Texas, my girlfriend, my stuff, all my friends. But it was non-negotiable. She cried, and I knew that was that. My cousin got along with me like a brother, and they had a nice house– something I really wasn’t used to– so reluctantly I agreed.”

It was a great decision.

By 2009, thanks to achieving resident status and qualifying for financial aid, DeLuna could afford college. He enrolled at Diablo Valley College in January 2009 with a major in business administration. “I can still remember that first nerve-racking day in Mr. Lacayo’s business statistics class like it was yesterday,” he said.

“My first semester I had to get adjusted to college life because it was the first time in more than eight years that I had been back in a classroom setting,” he said. “But after that I became a well-known face on campus.

“I was in EOPS (Extended Opportunity Programs and Services) and met many people that way,” he continued. “I joined Alpha Gamma Sigma and ran for president that semester and lost, but I came back the next election and became the public relations officer for the next two semesters. Along with the team, and especially Nick Carter, the activities coordinator,” DeLuna said, “we designed T-shirts now sold in the DVC bookstore, and we had the highest-grossing fundraiser in the chapter’s history.”

He also was a federal work-study student, and worked on campus with Emeritus College, the adult education program.

“I started in August 2009 and worked there until I transferred,” he said. “That was a sad day, because it was not only the job I’d had the longest, but I made many friends with the seniors who attended our classes, with the people I worked with, and with the distinguished Board of Directors members with whom I had the pleasure to serve as secretary for over a year.”

DeLuna received numerous scholarships through the scholarship office, and became great friends with Leslie Mills, who helped him get a full scholarship to UC Berkeley. He was the student keynote speaker at the annual 2011 scholarship reception.

Although he knew about the Puente program, DeLuna said, “I had advanced too far in English to be allowed into the program. But I was receiving so much support from friends staff, and professors at DVC that I felt I had to give back. So I approached the Puente coordinator, Patrick Leong, and asked him how I could help.”

Leong came back with a proposal that DeLuna accepted with excitement: to be the supplemental aid/tutor for Puente.

“I was scared beyond belief the first day and for the first tutoring session I gave, but powered through it,” DeLuna said. “I really tried to give more than great writing tips. I tried to give life lessons on how someone could be at the low of all lows, but with education they could make a path with a degree that no one could ever take from them.

“Sometimes students would come up to me and thank me for the help, and say that something I had done made a difference for them. That was my goal, and I accomplished it. That role taught me to be confident in who I am, and that no matter my background, my intelligence shone through. I actually would recommend that to anyone whose goals are aligned with the goals of the program.”

DeLuna earned a certificate in Business Core Transfer, and transferred to UC Berkeley just one math class short of earning an Associate degree. He started at Cal in August with a major in American Studies, and says he will probably have a double major in Sociology with a focus on organizations and institutions.

DeLuna said he will stay involved with outreach programs that encourage transfer to UC Berkeley.

“Cal is one of the best and most challenging experiences of my life,” DeLuna said. “Everyone is so darn brilliant! One of our professors won the Nobel Prize this year. Isn’t that cool?”

“I miss DVC!” he said. “What an awesome school. Everyone there was willing to go above and beyond. Professors care about teaching you the material because they all have passion for what they do. The staff helped me in any way possible. More than that, DVC was the stepping stone to the larger goals in my life, and for that, I consider it a life saver.”

As for the future, DeLuna hopes to start his own Internet business.

“Other than creating my own business, I’d like to travel and see the world. I want to get married and have a family, and live without financial struggles. I’d like to make a difference. This degree that I’ll receive from Berkeley will allow me to create a tangible future as long as I continue my fervor for education, which led me right where I am. I continually search for ways to ensure my successful future so that I can take care of myself, my family, and make a difference in my community. I feel I am made for something bigger. I wasn’t given this precious life to just sit around and wait. I go out and find life. I love my family and my girlfriend, and I cherish each day with the wonderful friends I have made.”