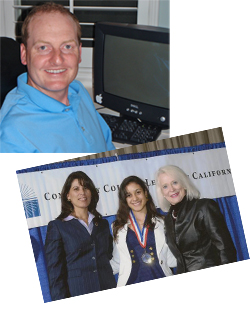 Two DVC San Ramon Valley Center students have been named to the 2011 Phi Theta Kappa International Honor Society All- California Academic Team. They are Lanny O’Connell and Rania Ammsso, both of Danville. The awards mark the fourth straight year that two DVC students from the SRVC Beta Pi Iota chapter have received this prestigious award.

The Coca-Cola Community College Academic Team program is sponsored by the Coca-Cola Scholars Foundation and is administered by Phi Theta Kappa Honor Society.

Lanny was named to the First Team, and is the first student from DVC ever to achieve that honor, which is the highest award. He is majoring in business administration and plans to transfer to UC Berkeley in the fall.

As a result of the high score he earned in the All-USA Community College Academic Team competition, Lanny was selected as a Gold Scholar by the Coca Cola Scholars Foundation, and is to receive a $1,500 scholarship and a Gold Scholars custom-designed gold medallion. There were more than 1,600 applicants for this award and only 50 were selected.

In reference to his achievement, Lanny said, “If I could describe myself in one word, it would be ‘resourceful.’ I’m not the most intelligent student, but I work hard and utilize the expertise and intelligence of the resources that surround me. I’d like to thank two of my DVC teachers and mentors, Julie Walters and Rene Sporer; Lucas Abbott at UC Berkeley; and my loving wife Dani for putting up with my rigorous schedule over the past two years.”

Rania was named to the Third Team. She is majoring in philosophy, with a minor in biological sciences, and plans to transfer. She has not yet decided where she will go, but is considering the UCs, as well as Stanford, Brown, Boston, George Washington, and Santa Clara Universities.

“Through Phi Theta Kappa, I have had the opportunity to develop knowledge on leadership, fellowship, service, and scholarship,” Rania said. “All these hallmarks of the honor society encourage me to strengthen my intellectual passions and contribute to my community. To be distinguished for my service to my community and for my academics is a magnificent and everlasting impression upon my enthusiasm to pursue and accomplish any goal or challenge.”

Both students were recognized at the awards luncheon March 21 in Sacramento, which is sponsored by the Community College League of California. Julie Walters and Rene Sporer, the faculty advisors, and Shannon Harvey, a student and the current PTK chapter president, along with SRVC Executive Dean Kevin Horan, attended the luncheon in support of Lanny and Rania.