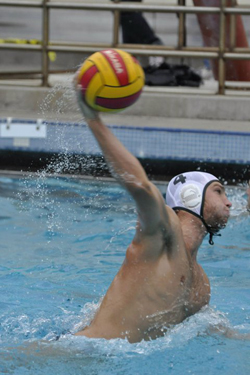 The Diablo Valley College men’s water polo team repeated for the third straight year as Big 8 Conference Champions. The highlights of the season had to be the team’s participation in the Navy Open tournament at the U.S. Naval Academy in Annapolis, MD, followed the next weekend by their participation in the Bison Open at Bucknell University in Lewisburg, PA. On top of that, this year the men’s water polo team posted one of the highest GPAs for a team sport.

John Roemer, the coach, attributes this success to maintaining priorities and developing an environment where students can be successful.

“I believe that if you create a successful environment by identifying goals, understanding expectations, defining steps to achieve those goals, and following through on your commitment to yourself and the team, you can’t help but be successful,” Roemer said.

He added that many student/athletes contact him about wanting to come to DVC and play water polo.

“I let them know right away what is expected, which goes far beyond playing water polo,” he said.  “If you are not successful in the classroom, you will never be successful in the pool.”  DVC’s men’s water polo is setting the bar high for its student/athletes.

Team Captain Ayal Keren, for example, earned a full ride scholarship to UC Berkeley. Matt Detrane transferred to Pepperdine University, and Bryan Evans has been accepted to UC San Diego and UC Santa Barbara. Six other players will be returning to DVC to receive their AA degrees.  In the past three years, except for one student who decided to work for the family business, all DVC water polo players transferred to four-year schools, including UC San Diego, UC Santa Barbara, UC Berkeley, University of Hawaii, University of the Redlands, and Pepperdine University.

With obvious pride, Roemer said, “I believe that when young men leave DVC, they are men of integrity and honor. They are just really good people who will do really good things.”