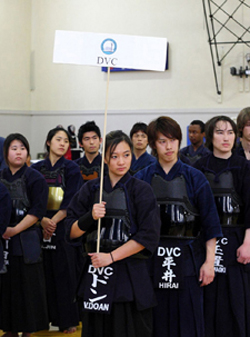 You’ve got to give them credit. The DVC Kendo Club, after practicing for just one term, went to a state tournament and competed against experienced clubs from UCLA and Harvard University. Just a few months ago, the team members didn’t even know how to properly put on the protective gear.

Kendo, a form of Japanese martial arts of swordsmanship, arrived at DVC in October 2008 when Toshihiro Watanabe formed a club. Though kendo is not a major sport in the United States, there are many kendo practice gyms, called dojos, in the Bay Area, including those in Oakland, Berkeley, San Francisco, Mountain View and Concord. And many schools - mostly state universities - have clubs, such as UCLA, which has one of the larger ones with 40 active participants.

In the art of kendo, having a solid set of basic skills, the equivalent of a black belt in other forms of martial arts such as judo or karate, makes you a “dan” holder.

However, after the spring of 2010, all the dan holders in the DVC club transferred to other schools. There were only a couple members left, so Williams actively recruited about 20 new students to the club, including Kentaro Hirai, a 3-dan holder who had just come from Japan. At the beginning of the term, only Williams and Hirai knew how to put on the protective gear properly. The rest of the members were complete beginners or had one term of kendo experience. Being the only dan holder, Hirai became the new club captain, and he and Williams worked patiently with the new club members on kendo basic movements.

At the end of fall term, the club members decided who would participate in the annual team tournament at UCLA on March 7. Most of the participating schools were from California, but this year Harvard University, which hosts another major intercollegiate kendo tournament in the United States, participated at UCLA as well. Diablo Valley College was the only community college among the participants. 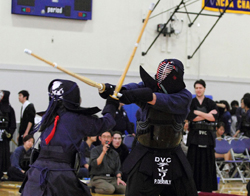 Beau Williams, Kentaro Hirai, Valerie Doan, Aaron Flynn, Patrick Dervily and Anthony Tamaoki
participated in the individual kyu (beginner) tournament, competing with UC Davis, UCLA, UC Riverside, UC San Diego, and Soka University America. Although no one from DVC was able to win the individual kyu tournament, Hirai took second place, an impressive feat not only because it was his first try, but also because of some problems with the matches.

Toward the end of the second match, the referees realized that they had mistakenly been following the wrong procedures for deciding results of the individual tournament matches. Hirai had won the first match by a decision, but it turned out the match had to be decided with points (that is, with valid attacks to the opponent). He then was required to redo the first match. As if that weren’t enough, no one was able to gain a point and the match, which normally takes two minutes, went into overtime for 10 minutes until Hirai was finally able to gain a point and win. “That,” said the club advisor Akihiko Kumakura, “is an extraordinarily long time for a kendo match.” On top of that, Hirai had to face a second rematch only a minute after he finally won the first rematch.

“It seems a miracle to me that he made it to the final match after such adversity,” Kumakura said. “I am very proud of his achievement, and am honored to have him as a member of the DVC Kendo Club.”

Ben Rosenberry, Tamaoki, Williams, Dervily, and Hirai participated in the team tournament, competing with UCLA, UC Berkeley, and UC Davis. In the preliminary round, Williams won once and Hirai won three straight times, but the team did not make it beyond the preliminary round. However, the DVC Kendo Club lived up to the reputation of the previous clubs and won a medal for the third straight year, once again spreading the name of Diablo Valley College to Southern California.