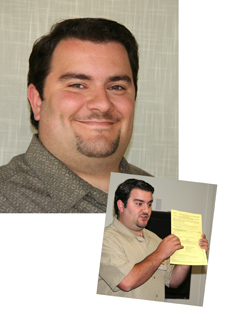 Chris Clark of San Ramon is a successful former DVC student. He transferred to Stanford University in the fall of 2010, and in the process, bestowed a great honor on DVC counselor Dennis Franco.

As part of Stanford’s incoming class, Clark and other students were given the opportunity to acknowledge a former teacher or mentor who played a significant role in their intellectual, academic, social and personal development.

Clark felt strongly about his choice -- Dennis Franco of DVC.

In a letter from Stanford notifying Franco of the honor, Stanford’s dean of undergraduate admission refers to “our enormous respect for the work that you do,” and says that both he (the dean) and Stanford’s president “recognize the commitment and care with which you approach your teaching.”

Clark, who grew up in the Bay Area, had been a Recon Marine from 2004 to 2008 and had served two tours in Iraq before enrolling at DVC following his discharge from the Marines in 2008. When speaking about DVC, Clark acknowledged Dennis Franco in counseling, Ted Blair in political science, Nicola Place and Sarah Boland in the Career Center, and Noha Basilious of Veterans Services. “All of these people,” Clark said, “were great resources for returning veterans, and really bent over backwards to help me and all veterans at DVC. They and people like them are what makes DVC a great place for veterans. Without their encouragement and support, I would likely find myself attending a very different school than Stanford.”

Though Clark recognized several individuals at DVC, he said, “The reason I chose Dennis for the award was his unwavering commitment to student veterans. He really cares about their success, and does everything in his power to ensure they transfer successfully from the military into the world of academia—something that, for many, has its own battles and obstacles.”

When service members separate from the military and choose to pursue their education, Clark explained, navigating college can initially be quite a challenge.

“Dennis, as a veterans counselor, is often one of the first people veterans meet as they embark upon this journey,” Clark said. “I don’t think he even realizes how great a job he does in helping ease that sometimes-turbulent transition. People have to remember that when veterans walk onto DVC’s campus for the first time, they are pretty clueless about everything as far as GEDs, transfer requirements, and all the college lingo. It entails entering a completely separate world. Dennis did an amazing job of making me and all the other veterans I have spoken with understand the options available.”

Clark said that having someone like Dennis acknowledge the fact that you need a bit of guidance when you first get to campus is “truly amazing.”

“I can honestly say that without Dennis and all the faculty who support veterans, my transition from the Marine Corps to DVC would have been a far rougher experience,” Clark said. “I remember the first day I arrived at DVC to sign up for classes and get to know the campus. Someone rattled off to me a laundry list of things to do and places to go before I would be entitled to GI benefits—something I was reliant upon.

“I recall being extremely frustrated,” Clark continued, “thinking ‘a few weeks ago I was a sergeant, a Recon Marine, and have done multiple combat deployments. Now I’m being told to do a hundred things before I can receive my benefits, and I don’t even know where the Counseling Center is, and I certainly don’t know what choosing classes that are transferable and logging into Insite means.’ Having Dennis and similar faculty around completely alleviates this frustration as Dennis goes out of his way to help veterans find their way and accomplish their goals.

“It was obvious to me that Dennis was there for much more than just a paycheck,” Clark continued. “Dennis is the type of person who would go out of his way to help a veteran. He was present at every veterans function, always offering his advice and support in any way that he could.

“The wars in Iraq and Afghanistan have, and will continue to bring a wave of military veterans to college campuses. Dennis and people like him are great in facilitating a smooth transition during these life-changing times.”