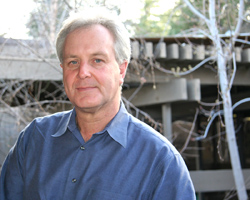 Douglas Spindler, a computer network technology instructor at Diablo Valley College, has been awarded the distinction of being chosen as a Microsoft Most Valuable Professional (MVP) for Jan. 1, 2011 to Jan. 1, 2012, by the Microsoft Corporation.

The Microsoft MVP is an annual award that recognizes exceptional community leaders in technology worldwide who actively share their high-quality, real-world expertise with users and Microsoft.

According to the Microsoft Corporation, “Microsoft MVPs represent a highly select group of experts, with fewer than 5,000 awardees worldwide. They share a deep commitment to community, a passion for technology, and a willingness to help others. MVPs are present in over 90 countries, spanning more than 30 languages, and over 90 Microsoft technologies. By sharing their knowledge and experiences, and providing objective feedback, they help people solve problems and discover new capabilities every day. MVPs are technology’s best and brightest, and we are honored to welcome Douglas as one of them.”

Spindler said he was nominated by his peers to receive the MVP award. “Microsoft keeps the selection process for this award very confidential, even from internal Microsoft employees,” Spindler said. “It is a prestigious and selective award, so it is quite an honor to have received it.”

Spindler added that he was very surprised to learn that he had received the MVP award. “The award is given to those demonstrating leadership and their willingness and ability to help others make the most of Microsoft technology,” he said. “This award means that Microsoft and my peers recognize me as an industry expert. I was honored to be chosen from the hundreds of millions of people who use Microsoft products,” he said. “I hope to use my expertise to help my students achieve success in their careers so that they, too, will someday be recognized as industry experts.”

One of the benefits of receiving the award, Spindler said, is that he will be able to attend the MVP Worldwide Award Summit at Microsoft’s campus in Redmond, WA, in February.

“The Award Summit will allow me to learn about the latest technologies from Microsoft, which I can then share with my students this term,” he said. “ I will also have the opportunity to meet other college IT instructors.

“DVC has a reputation for having the best IT program in the Bay Area,” Spindler concluded, “and I am proud to be teaching here.”