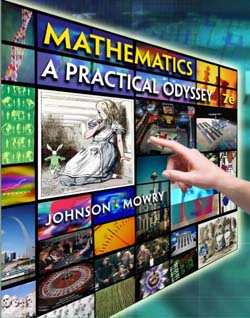 Dave Johnson and Tom Mowry, professors in the Mathematics Department at Diablo Valley College, have just published the seventh edition of their math textbook, Mathematics: A Practical Odyssey, after about a year of working on it in the summer, evenings and weekends.

The first edition of their book was published in 1991, by Brooks/Cole, and was copyrighted in 1992. The two have worked together on all seven editions. Since it was first published, the textbook has been adopted at DVC for Math 124 “Mathematics for Liberal Arts” (a popular transfer-level course among liberal arts majors). In addition to DVC, the book has been used at many other schools across the country, including four-year institutions, community colleges, and high schools.

How did the book come about?

“We saw a need,” Johnson said. “The CSUs imposed a new college-level math graduation requirement, and we felt that there were no appropriate courses for that audience at that time. Then other university systems started doing the same thing (requiring the math course).”

“ At the time, there were no appropriate level textbooks for such a course,” Mowry said. “We were among the first to create a textbook with an intermediate algebra prerequisite specifically for liberal arts majors.”

Johnson has been teaching at DVC since 1975, becoming full time in 1982. He has taught almost all the math courses DVC offers, but now focuses on the entire engineering calculus sequence, intermediate algebra, Math for Liberal Arts, and Finite Math. Mowry has been teaching full time since 1985. He has taught all but three of the courses offered in the Math Department, but now focuses on statistics and the engineering calculus sequence.