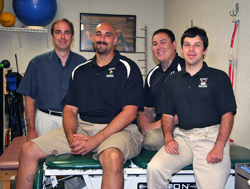 The FWATA award recognizes those who have or are making a significant contribution of their time and energy to the organization and the promotion of athletic training. The NATA national award recognizes members from the 32,000+ organization who have demonstrated a strong commitment to their local and national associations, and will be acknowledged during the 2011 annual meeting and clinical symposium in New Orleans.

Chisar earned his B.S. degree at CSU Fullerton and his M.S. degree at Hahnemann University in Pennsylvania. He has been teaching at DVC since 1995.

Chisar is currently working on a peer-reviewed research article with a co-author on fatalities in young athletes and in April 2011 had a poster presentation at the FWATA annual meeting, titled “Sudden Death in Young Competitive Athletes: Analysis of Deaths in the United States, 2008-2010.”

He has completed data collection on a second research article with a local physician regarding a meniscal repair device. That research was also the topic of a poster presentation at the AANA meeting in April titled “Meniscal Repair Using the USS Sports Medicine Meniscal Stapler.”

Not only has Chisar achieved great success in his career at the state and national level, but he is also helping his students to reach their goals in the field.

Rick Becker (second from left in photo) received the 2011-2012 CATA scholarship, and will be transferring into the athletic training education program (ATEP) at Cal State Fullerton. DVC student Rebecca Ribiero was the recipient of this award for 2010-2011, and is also at CSU Fullerton. Nine of the last 10 recipients of this competitive scholarship for community college students who are pursuing a career in athletic training have come from DVC.