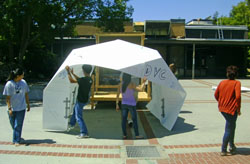 Under the design concept of Social Parametrics, DVC students competed against 50 teams from 41 schools, including both universities and two-year programs.

“We started the process in January, when the students formed teams and began designing their individual projects,” Valdez explained. “It’s impressive that our students won, as they’re competing against students from the New School of Architecture in San Diego, Cal Poly and many other four-year schools. It was really stiff competition.”

As in past years, teams from across the United States designed and built a theme-based structure that had to meet several additional requirements:

DVC’s winning ACE team #28 used US Postal Service triangle mailing containers, white foam-board, clear reinforced tape, and plastic sheeting to build the structure in which they actually lived for the weekend. Two expandable portals linked to the central living area. To highlight the Social Parametrics concept, the ACE team offered all visitors colorful Magic Markers to record comments and impressions of their structure.

Teams and their structures were professionally judged on Structural Craftsmanship, Creative Portal, Livable Space, Community Space, and Innovative Lighting. The People’s Choice Award was chosen by vote of visitors, judges, and other event participants.  This is the second year in a row that the DVC team has won the People’s Choice Award. Last year’s theme was Luxury Landfill and structures were required to be constructed from found or recycled material.

“The students come away from this weekend experience with an appreciation for team building,” Valdez said. “They have heated discussions about everything from design, materials and logistics, and while they push for their own ideas, they ultimately come together with one structure that they actually build. Many students don’t get to do this kind of thing until graduate school, so it’s a very good opportunity for them.”