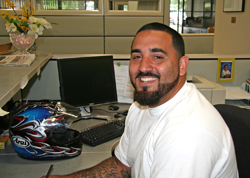 Enrique Chavez is an intelligent, charming young man who feels like he is living in two very different worlds at the same time. At 28 years old, the single father of two boys has seen enough of life to know which world he prefers to live in, and he is working very hard to become a role model both for own his boys and for other young men who have come from backgrounds like his. It is his strong ties to his “other life” that will help him make a difference.

Enrique did not graduate high school, but it wasn’t because he couldn’t make the grades. In fact, by his junior year, he had generous scholarship and athletic opportunities available to him, but like so many of his fellow students at Balboa High in San Francisco, he “hung with the wrong people” and he made the kinds of choices that ended his high school career early and landed him in Juvenile Hall for what would have been most of his senior year. By the end of that same year, he was introduced to another new life experience: parenthood.

Enrique didn’t remember seeing any options when he took his life path: his high school ranked among the very bottom in the state of California and most of the young men and women were struggling with the same social pressures of gangs, broken families, and illicit activities. Spending time in prison was not a surprising outcome to the young Chavez, who had “a family of convicts” with most of his uncles either in gangs or prisons. One of his uncles, in fact, is a very “high ranking inmate” inside the prison. It was almost expected that Enrique would eventually find himself behind bars, and at the time, the idea of time in prison didn’t particularly bother him. It was a familiar path paved by many in his family before him.

His father left the family when Enrique was very young and his mother was not always financially or emotionally able to take care of his brother and sisters. There was even a time, shortly after his father left, when he remembers that things were so bad that his mother, brother and sisters had to live out of a car for several months.  As the oldest of four children, Enrique had very little sense of what a functional family looked like.

His circumstances forced him to become very independent from the time he was quite young. He remembers taking BART and the bus from Fairfield all the way into San Francisco to visit his grandfather when he was just ten years old. He grew up living back and forth between both places. He grew up understanding that money made a huge difference, and he became very motivated early on to make his own money any way that he could.

Enrique clearly remembers when he first realized that his life was not “normal” and not everyone lived the way he did. The family that he had was all that he knew -- with his mother coming and going, uncles in and out of jail, people he didn’t even know hanging around the house being loud, violent and disorderly, and no one ever paying much attention to him regardless of what he was up to, good or bad.

When he was in sixth grade he remembers visiting his best friend’s house nearly every Friday night that year. Enrique noticed that it felt different than his house. His friend had a close, supportive family and he realized that this was something that was absent from his life. He was making good grades in school, he was a good athlete, and he had a lot of friends, but he knew that this wasn’t enough. He saw how much he wanted the kind of support system his friend took for granted. He also realized there was nothing he could do to fix it.

Enrique’s strongest role model was his grandfather, who owned several properties and a successful bar in San Francisco, and was always there to help him out when he needed it. His grandfather understood more about money than most of his family, and ended up being the one to bail everyone out when then got in trouble. But his grandfather died a relatively young man from the effects of alcoholism, and Enrique began to realize as he grew older, that he would have to learn to depend on himself.

Enrique’s first son was born a week late and continued to be delayed in most of his development. “I knew that there must be something wrong with my son. I saw other kids, and I knew Elijah was not the same, but I couldn’t afford the medical care needed to get a diagnosis,” Enrique said.

By the time Elijah was five, Enrique had worked his way into a well paying union construction job with benefits that would finally allow them to see the neurosurgeon who confirmed Enrique’s fears: Elijah had cerebral palsy. Even with excellent coverage, that first year of care cost Enrique $30,000, and by this time, there was a second child on the way.

To make matters worse, not long after Elijah’s diagnosis, Enrique fell from a rooftop while at work and had to undergo a major surgery in his shoulder. By now he was a single parent, had sole custody of a tiny baby in additional to Elijah, and he was recovering from his fall. Enrique had to handle his responsibilities and could not take the time to allow his shoulder a full recovery. Enrique suffers the consequences still, but has no regrets. “You just do what you have to do,”

It was not long after the fall that Enrique was diagnosed with cancer. He had never really needed much help before, in fact, he was the one who, like his grandfather, always ended up taking care of everyone else in his family. When the time came when Enrique could use a little extra help, and he realized how non-existent support programs for single fathers were.

Enrique had always worked very hard, but now it didn’t seem to be enough. “I started to get tired of being a ‘nobody’,” Enrique said. “As a child I always knew that I was supposed to do something special. When I realized how important a support system was for young boys, I wanted to do something to help other young kids. I realized that I was too busy trying to earn a lot of money, and I wasn’t able to be who I wanted to be at the same time. I realized it would be better for me to start over again and struggle a little with the ‘right people.’ College was where I thought I could do that.”

Enrique has a cousin who had a very similar background and recently graduated from UC Berkeley and is now in law school. He told Enrique that Diablo Valley College was where he should start.

When Enrique first stepped onto the DVC campus he felt like he was totally out of place and did not belong there, and that everyone else knew it too. It was hard for him, but he had done a lot of thinking and he knew that this was just a different kind of “hard work” and he knew he could do it. He began spending time in the Student Union Building and it was there he began to meet other students. He also learned about the EOPS program where he was able to get both financial and academic support for students like him from disadvantaged backgrounds.

Apparently college was the right move for Enrique, because he completed spring 2011 term with a 4.0, he will be completing his AA degree in Administration of Justice next spring and will be transferring to San Francisco State in the fall.

For the first time in his life, Enrique’s goals and motivations are not about money. Ironically, he intends to earn a law degree, but does not plan to use this to earn large amounts of money, but instead to develop government programs to help young men and especially young fathers who need support.

“It took me quite a few years to stop focusing on the dumb stuff,” Enrique said. Half the battle is learning what the “dumb stuff” is. Without a positive support system, it is nearly impossible for young people to make these important distinctions. Enrique took a long time to learn this for himself, and he hopes to help young boys see that education, and a positive direction in life, is a reasonable option.

After taking a philosophy class this spring, Enrique has done a little “philosophizing” about his own life. “I see myself like ice. I can live in two different worlds, but I am different in each one. When things around me are cold, then I freeze. I know how to be hard when I need to be. But when the sunshine is out and everything is warm, I easily melt and begin to flow.”

Enrique is working hard towards a life filled with much more sunshine.