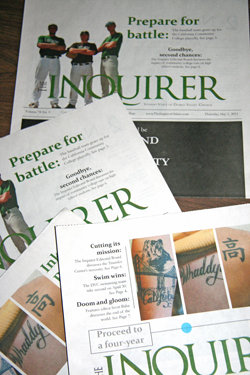 Diablo Valley College journalism students, members of The Inquirer staff, won 11 awards at the statewide convention of the Journalism Association of Community Colleges, including a general excellence award for newspapers printed during fall 2010 term.

According to faculty adviser Mary Mazzocco, about 567 student delegates and faculty members from 47 community colleges, including five students from DVC, attended the conference held in Sacramento the weekend of April 9-10.

The general excellence award is based on a rubric that judges three consecutive issues of the paper for writing and layout skill, sourcing, photo quality and news judgment. It requires the staff to be able to perform well as a team over a period of time.

“Kudos go to Samanda Dorger,” Mazzocco said, “who was the newspaper adviser in the fall, for coaching the staff to this win.” All awards except in the on-the-spot competition were for work done during fall 2010.

Rea also won two awards in the on-the-spot competition for front page design. He won fourth place from the professional judges, and third place in the “people’s choice” voting.

“A win in statewide competition is a big deal,” Mazzocco said, “especially given the size of some of the Southern California programs we were competing against.”

At the convention, Mazzocco was elected president of JACC, a nonprofit educational organization that gives out scholarships and sponsors one state and two regional journalism conventions each year. She will serve a three-year term.