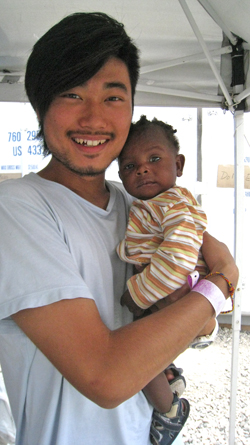 Originally from Seoul, South Korea, Lee came to the U.S. to attend St. Michael’s College in Vermont. He was in the Intensive English Program for about two years there, then became a regular student in 2009.

He had been at DVC for only a term when, at the invitation of a graduate from St. Michael’s College, he decided to do something “meaningful” and volunteered to work in Haiti, going for 14 days in May 2010.

Lee went with the volunteer organization Project Medishare for Haiti, a Florida organization founded in 1994 by Dr. Barth Green and Dr. Arthur Fournier from the University of Miami’s Miller School of Medicine. The organization is dedicated to sharing its human and technical resources with its Haitian partners while striving to achieve quality healthcare and development services for all. The mission is accomplished through two distinct but complementary programs, the Community Health Program and the integrated Community Development Program, which frequently intersect.

“Most of the volunteers are doctors, nurses, pharmacists, psychologists, and physical therapists, as well as journalists, translators and photographers,” Lee said. Although he has no medical background, he said, “there were hundreds of things to do.”

“The deadly earthquake completely destroyed the livelihood of the locals, and I experienced their misery with them,” he said. “Under the protection of the UN peace corps, the tents of Project Medishare were completely full with severely injured people who needed surgery. Many others had to wait in line. However, I found the birth of a new life during this moment of despair, and I was moved by the local people’s dance and song to bless the baby’s future.

“For two weeks in Haiti I was in charge of a medical supplies warehouse,” Lee continued. “Even if I could not face the patients and treat their injuries, I felt responsible to serve the people by supplying the right amount of medicines and medical supplies at the right time. I learned that a good leader must understand and work with the other people as a team. Moreover, in such a desperate and time-limiting environment, I learned the importance of listening to others and quickly finding a consensus for better communication.

“Nevertheless, the experience in Haiti was not always positive,” Lee continued. “I was shocked by the affluent restaurants in which people were dining, oblivious to the national disaster and suffering. It made me crave to learn more about the cause of such extreme social and financial gaps among the different groups of people.”

He said the experience in Haiti had such an impact on him that he will feel it for the rest of his life. He plans to go back to Haiti someday, either through the organization All Hands Volunteers or through the international Humana People to People organization.

Lee’s interest in international relations may be the result of his world travels. He claims to have set foot on every continent except Oceania (Australia and area), and said, “Visiting developing countries became a critical part of my life. By understanding their lives and helping to fulfill their needs, I felt appreciation for what I have.” In addition to Haiti he has been to Malaysia, the Philippines, Japan, Egypt, Ethiopia, Colombia, Venezuela, Brazil and into the Amazon.

“I met many people in the U.S., and I could better understand other cultures and environments,” he said. “I have participated in the Pennies for Peace campaign from NGO to raise money to help Afghanistan. I helped seniors at a retirement home in Vermont, and I taught English in Vermont to African refugee children at Champlain Elementary School. By having such experiences, I have learned how to transform my empathy for people from different environments into a meaningful personal relationship.

“I believe that language connects people to people and culture to culture like a bridge,” he continued. “Therefore, I am striving to concentrate on Spanish and Japanese.

“My various life experiences to understand many people from different environments would be a great asset in my new major (international relations) and help me reach my goal of contributing to society.”