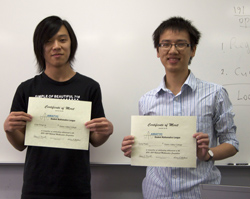 Thirty-five Diablo Valley College students recently competed in the American Mathematical Association of Two Year Colleges (AMATYC) Exam, a 20-problem multiple choice test. It is held nationally at any community college that chooses to participate. DVC student Chan Pong Lei scored the highest of all the DVC students, driving DVC to a rank of ninth out of 191 teams nationwide, and eighth out of 48 in the highly competitive West Region. The combined scores for the top five individuals make up the team scores for each round.

According to Holly Kresch, one of three faculty who administered the exams, “The exam has two rounds, one given in the fall and one in the spring, each of which is a different exam. The test is quite challenging, thought-provoking, and pretty tricky, and students have only 60 minutes to complete it.” It is also an exam that discourages guessing, she added, as it is scored with a penalty of one half point for a wrong answer, zero points for a blank or no answer, and two points for a correct answer. The combined score is a total of the scores from round one and round two.

“Chan Pong Lei did remarkably well,” Kresch said. “He had 18 correct and two incorrect in the first round, resulting in a score of 35 out of 40. Consequently, he had some pretty terrific standings, placing 13th out of 1,976 students overall, and placing eighth out of 563 in the West Region. After the second round he achieved a final combined standing of eighth place out of 2,093 students nationwide, and fifth out of 617 in the highly-competitive West Region.”

For his achievement, Chan Pong Lei will be awarded a scholarship from the DVC Math Department along with a monetary award from CMC3, a professional mathematics organization for California community college faculty. The DVC Math Department is also awarding scholarships to two other gifted mathematics students, Dung Pham and Heman Sun, for their second and third place standings at DVC.

Chan Pong Lei is also doing an independent study reading class on modern differential geometry with part-time mathematics faculty member Dr. Robert Hasner. Dung Pham and Heman Sun are both students in Hasner’s Math 292: Calculus III course. Hasner said, “I am very happy to have these talented students in my classes,” and is in general very impressed with the performance of the students in these levels of math classes at DVC.

The DVC students were given an added boost when adjunct math instructor Dr. Quan Lam volunteered to lend his expertise by conducting practice sessions for interested students during this school year. Lam said, “With the knowledge and enthusiasm that the attending students showed during practice sessions, I am not surprised they did so well in the competition.”

Professor Kresch would like to thank all the students who participated, as well as Jenny Freidenreich and James Magee for helping to administer the exams this year. Students are encouraged to take the exam if they have taken Pre-Calculus (Math 191) or a higher-level math course. Any DVC student who is interested in taking the AMATYC exam in the fall should contact Holly Kresch.