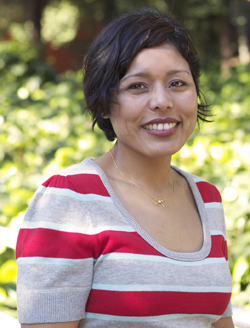 Yessi Chaffo-Ramirez always knew she wanted an education. She didn’t know that it would take enrolling at Diablo Valley College before she really got one.

At the age of nine, Yessi immigrated to the United States with her family from their home in Lima, Peru. None of them had ever had even an introduction to the English language.

The family lived in San Francisco, and at that time, Yessi’s public elementary school did not yet have an English as a second language program. Though she spoke no English, Yessi, like so many others, was passed from grade to grade, not understanding a thing that was being taught to her except for math.

“I was so upset over that, I was determined to show them that was not so,” Yessi said. “That term I focused all my energy in studying really hard, and I finished the term with honors. Of course, by then I had learned enough English to get by, and from that term on, I passed all my classes and graduated from the eighth grade.”

When it was time for high school, her parents could no longer afford private school for Yessi and her brother, so they put them in a local public high school. “I thought walking around not understanding much English or what was going on was frightening enough,” Yessi said. “But I soon learned things definitely could get far worse: gang fights and shootings were part of a typical day at my new school. The chaotic environment was too terrifying for me, so I decided to leave.”

With the support of her mother, Yessi enrolled a short time later at Independence Continuation High School. She met with an assigned teacher once a week, had a short lesson, turned in assignments, and picked up new ones for the following week.

“I also worked a full time job to help out my parents,” Yessi said. “I felt I was not successful in school, and decided to learn my way. I wanted to see for myself all those places I read about in my history and social studies textbooks. The job gave me the opportunity to afford my passion for traveling abroad during the summer. I put money aside from every paycheck for my travels, and I learned a great deal indeed!”

In 1992, Yessi graduated from high school, and at age 20, she married her first husband. Five years later, she divorced and moved in with her parents, who now lived in Concord. It was then she decided to pursue her long-held passion of going to college.

A friend introduced her to DVC, and in the summer of 1999 she enrolled.

“My first couple semesters at DVC, I failed miserably,” she said. “First, I chose summer session to begin, but it was too short and fast-paced for me. I thought I would do better with a regular-term class. But when fall classes began, I continued to feel ill-prepared in many of my classes.

“Like many other students, I blindly chose classes based on interest only,” Yessi said. “I often overlooked prerequisites noted on the class schedule because I honestly did not understand what it meant, and I was too embarrassed to ask. So there I was, taking classes for which I was not academically prepared. I did this for a couple of semesters, and was getting really frustrated and becoming very disappointed with myself because I was not succeeding in these classes I had chosen. I was starting to think there was something wrong with me. Maybe I was too old to embark on this academic journey (I was 27 years old by then), or maybe it was too late for me.

“My Latin American history instructor, Marge Lasky, took notice of my struggle,” she continued. “Even though I had a lot of passion for learning and for the subject, I was failing her class. She asked me about my academic background, and soon realized the problem.

“What was really wrong, of course,” Yessi said, “is that I didn’t have much of a chance from the beginning.”

First, she struggled learning English, though she became somewhat proficient in English by the time she got to high school. But after being passed from grade to grade in elementary school without understanding anything except math, she did not have the academic foundation she needed to succeed in the rest of her classes.

“Marge Lasky suggested I do some testing at the Assessment Center to figure out the level of classes I should begin with, and it was then I learned that, academically, I was at remedial level. She [Lasky] also referred me to Rita Delgado and the Puente Program. That is when things started to turn around for me.”

In her last year at DVC, with the help of her math instructor, Cheryl Wilcox, Yessi also learned that she has a learning disability.

“All I can say is bless Mrs. Wilcox for noticing that,” Yessi said. “If it weren’t for her, I would not have been tested and received the assistance I needed to be successful in my remaining semesters at DVC and then at UC Davis. I went from a ‘D’ to an ‘A’ in my math tests. So I say yay for Mrs. Wilcox, and thank you for all the love and support!”

“They all helped me along the way, and lent me their support and encouragement, which was vital to my success at DVC and onward,” she said. “I am forever thankful to all these beautiful people.”

Yessi completed her studies at DVC, majoring in Liberal Arts, and transferred to UC Davis in 2004. She graduated from UC Davis in 2008 with honors, earning a B.A. degree in Native American Studies with a minor in Education.

Soon after graduating from UCD, Yessi married Ricardo Ramirez, a current DVC student, and started a family 18 months ago. Though she worked in the Early Education field for a couple of years, she is not currently working. “I do still have an interest in working with children, but it will be in the Counseling field,” she said.

Does she have any advice for current high school students?

“I would absolutely recommend Diablo Valley College to others,” Yessi said. “DVC not only provides high quality education, but also has excellent instructors who care and are committed to helping students succeed. I also recommend the Puente Program to other students. The Counseling component of Puente is what most students are looking for: more one-on-one guidance, and because Puente is a two-term commitment, you build a sense of family with your instructors and classmates.

“If you are unsure of your major, it’s okay,” she continued. “You are not alone, as many of us start off not knowing our field of studies right away. Start with your general requirements, and in the process you will get a sense of the kind of classes you are drawn to, which will lead you to determine your field of interest. Definitely take a career and/or counseling class to help you with that. Taking Rob Peters’ Career 110 class really helped me narrow down my career interests.

“For those who had it rough during your high school experience,” Yessi continued, “college is your second chance. DVC is full of special people. They are waiting to make you another success story. You are the author of this new chapter of your life. Make sure it is everything you want it to be.

“Above all, dream big and aim high, because Si se puede! Yes you can! Because everything is possible.”