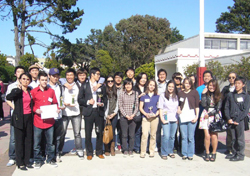 Mrs. Cheryl Poon of Pleasant Hill, CA, was very proud of her three daughters, Emily, Verity and Bridget, all of whom are home-schooled. The three sisters became interested in China, the country of their father’s ancestry, and wanted to learn to speak Chinese. Emily admires the Chinese culture for respecting the elders and nourishing the youth. Verity adores Chinese food, and Bridget loves Chinese opera. Mrs. Poon is Caucasian and has never studied any Chinese, and her husband, Francis Poon, is from Macau, and himself does not speak Mandarin, so they looked to DVC for classes in Mandarin. They studied with Young-ming Wu and Professor Sheree Lin.

The Poon sisters now speak Mandarin very well, and their teachers say, “If you sent them to China right now, they would have no trouble living or studying there.”

DVC students won the following awards at the contest:

Emily Poon won a first place. She is a second year, first semester student in Chinese 220, and defeated competitors from the Defense Language Institute and UC Berkeley to win.

After the contest, DVC students participated in a talent show. Anthony Koo sang a Chinese song, “Tonghua,” and Jessica Yau showcased her black-belt Karate skills. The audience greeted both enthusiastically.

The CLTAC was founded in 1962 by CSU-San Francisco professors K.Y. Xu and Leo Chen, and Maurice Tseng started the Chinese speech contest, which is open to all Bay Area Chinese language students from elementary school to the university level. The present day Mandarin Speech Contest of Northern California is the largest speech contest of its kind in the country.

The CLTAC is one of the largest Chinese teachers associations in the United States, with more than 200 active members in more than 40 affiliations in California universities, colleges, institutes, high schools, middle and elementary schools.

Professor Lin extends her heartfelt thanks to Lily Miao, DVC speech coach, to all the DVC Chinese instructors, and to the dean’s office and department office for their support.