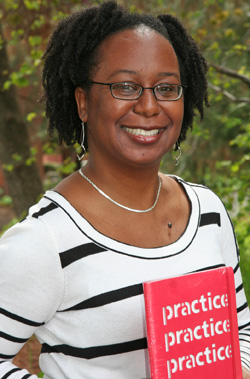 Jamylle Carter, PhD, an assistant professor of mathematics at Diablo Valley College since 2009, was part of a choral group that sang at Carnegie Hall in New York on Feb. 19.

“I never thought I would perform there!” Carter said. “It just happened. I’ve been listening to guided meditations from Kenny Werner’s book Effortless Mastery: Liberating the Master Musician Within, and in the second meditation, he says, ‘Imagine yourself on the stage of Carnegie Hall.’ Well, I don’t have to imagine anymore. When we arrived onstage for our only dress rehearsal in the hall, I just breathed deeply and took it all in.”

Music has been a part of Carter’s life for a long time, as she began singing as a child.

“My mother entered me in a talent program in Montgomery, AL, when I was about six years old,” she explained. “I Sang ‘How Great Thou Art’ and she played the piano. I also attended church choir rehearsals with her at St. Jude Catholic Church in Montgomery.

“I studied piano, and singing is kind of an easy off-shoot, but playing piano is my main interest,” she continued. “I took private classical piano lessons from elementary school through high school in Montgomery. I also took a music (choir) class my sophomore year in high school, then took 1-1/2 years of music theory at Harvard University. I later took piano classes (Gospel Piano and LEFTY: The Left Hand) at the Jazzschool in Berkeley.”

But the choir music stuck with her, and she participated in the Kuumba Singers and one of its a cappella groups at Harvard University. From 2001-2004, Carter was the musician for a children’s choir at Fellowship Missionary Baptist Church in Minneapolis. After moving to California, she sang in a church choir in Los Angeles, then joined the choir at the East Bay Church of Religious Science in Oakland in 2005 and has been a member ever since.

“Jacqueline Hairston is a musician at EBCRS,” Carter said. “After I joined the choir, she brought me into the music ministry leadership team as a substitute pianist and choir director. She is an incredible mentor and musician, and has taught me so much about how to run rehearsals, how to teach, and how to treat people. She frequently made us laugh and treated us like family, and by the time we arrived in New York, we felt like family. All our rehearsals were so filled with love and appreciation.”

The Hairston Ensemble was joined at the Carnegie performance by a number of other choirs, comprising a 300-voice choir. Other choirs included Dominion A Cappella Ensemble of San Francisco; Delta Choraliers of Delta Sigma Theta, Inc, of Los Angeles; Unity Harmony Rock Choir of Palo Alto; The Inner Light Choir of Soquel, CA; The United Voices of Detroit, MI; and The Sound of the Northwest from Seattle, WA.

The program featured Jacqueline Hairston’s Choral Spirituals, with Byron Sean on piano, and was the world premiere of Echoes of Jester Hairston Quodlibet.