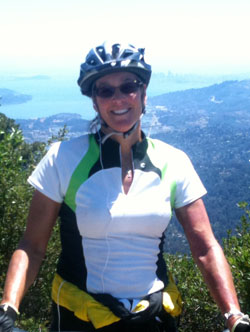 What’s a mother to do when her children have (almost) left the nest?

“I have three children,” she explained. “Haley, 26, has graduated from college and is applying to graduate school to study psychology; Hunter, 22, is a junior at San Diego State University and plays football there; and Joey, 14, is a freshman at Acalanes High School and plays football and basketball.

“I have always been an athlete,” Hewitt continued, “and I was a gymnast in college, but when the kids were little and in school, it was all about their accomplishments and their sports. Before kids I did compete in road races, ran a marathon, and did a few triathlons. But now that I have found the time again, I decided to start training and competing.

“Competing when you’re older is so much less stressful,” she said. “You don’t worry about the other competitors. You just go for it with no stress. When I have people pass me –I can usually tell – I look over and think, ‘She’s 35, or he’s 28.’ Who cares? They are not in my age group, so I don’t stress about them. I just want to see how much I can push my body without getting injured.”

Hewitt said she first returned to racing last April. She competed in a local triathlon in Moraga just for fun—it was a quarter-mile swim, a 12-mile bike ride, and a three-mile run. 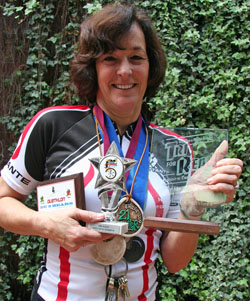 “I got third in my age group, and I came home and slapped that trophy on the kitchen counter and said to my husband—I’m back!  Then I started riding with a friend, then a group, and before you know it, I was climbing Mt. Diablo, Mt. Tam and Mt Hamilton—any mountain. I just love biking!”

In June Hewitt competed in an Olympic-distance race (1 mile swim, 25-mile bike ride and six-mile run), the Silicon Valley International Triathlon, and placed fifth. More recently, in September, she competed in a triathlon in Pleasanton and placed first in the Master’s Division (for those over 50).

“I brought my trophy into class, put it on my desk and showed my students, and they all said, ‘What does Master Division mean?’ I said ‘It means I am a master at this.’ ”

The Master’s Division, she said, is for those over 50, and “That is the amazing thing. I never thought my body could do this again—but it can. I have met triathletes over 70, and they typically win 1st, 2nd and 3rd in their age group because now the field has narrowed. There are not a lot of other people you have to beat. I don’t care. I love winning!” She knows it will be short-lived, as aging continues, but in the meantime. . .

“Also, with this sport,” she continued, “you don’t over train if you have three different ways to train. I typically swim a mile, or ride 30 miles or run six, so you can mix things up. And sometimes I’ll combine a ‘swim and spin’ or ‘ride and run’ but I never have to push fast. Just go long; anyone can do this. It just takes up time, and if you enjoy being outside as I do, this is a great sport.”

Hewitt said she really got tired of being in the gym—running to nowhere on a treadmill or riding in place. “I am now out ‘wandering’ around the county and ‘crashing’ the DVC super circuit classes and swim classes. The coaches in PE have been great,” she added. “They have always let me train and have helped me.”

She strongly encourages her DVC colleagues to try it. “ I am so thankful we have these facilities and I have become a real regular down in PE,” she said.  “We really have no excuse for not staying fit here when we all have access to such great coaches and facilities. I would love to inspire any other ‘mature’ colleagues to join me and rediscover that athlete inside that they once had. It does come back, and sometimes even stronger.”

Hewitt’s next challenge is the “Escape to Alcatraz” on June 10. “If I get in,” she said, “this is a really cold 1.5 mile swim from Alcatraz, an 18 mile ride out the great highway and then an eight-mile run. It’s a real challenging one—but what do I have to lose?