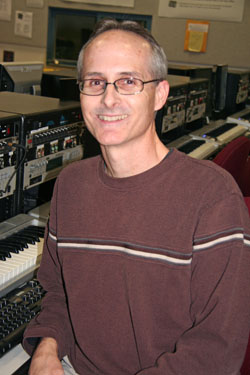 The next time you see a Hyundai car commercial, think about DVC’s own Doug Michael. He composed and recorded the music for a Hyundai commercial, which is narrated by actor Jeff Bridges.

(View the commercial at Michael’s website: www.reverbnation.com/
dougmichael. You can also play some of his original songs here.)

Michael has been a part-time music instructor at Diablo Valley College since 1999. He currently teaches Music 173 Advanced Electronic Music, and Music 177 Introduction to Reason. He has also taught an Intro to Digital Audio in the Art Digital Media area and other music courses ranging from a class on making drum beats to the Introduction to Electronic Music course. In 2006, Michael was hired as the music lab coordinator, which includes maintaining computer labs in the music department and the art digital media area.

Michael’s DVC roots go back further than that. He was a student at DVC in the early ’90s, earning his A.A. degree, then transferred to San Jose State University, where  he earned a B.A. degree in Electro-Acoustic Music. He then went on to Mills College, where he earned a Master’s degree in Electronic Music and Recording Media.

“Before college, in the 1980s,” Michael said, “I moved to Los Angeles and tried to be a rock star. I had a lot of fun and played some cool gigs. We played some clubs on the Sunset Strip in Hollywood and appeared twice on a live TV show called The Zoo.  In 1982, I graduated from Musicians Institute with a focus on guitar performance.”

Michael is also a regularly- featured composer on the TV show Planet X, a syndicated sports show. “I’ve been composing music for the show for the last two seasons, starting in 2010,” he said. “I don’t write music specifically for the show, per se, but I do give the show about 20 tunes or so every year, and they choose what they want from the bunch. They use a handful of different composers and music libraries, and I’ve had about a dozen tunes aired over the two seasons.”

“I work with a handful of publishers and music libraries and connected with the Hyundai people through them,” Michael explained. “The specific web presence where I received the lead was The Film Music Network, which had a job listings section. These days there are many companies out there that make money by placing music.”

Michael has won various composition awards, and his works have been performed at many music festivals throughout the world, including in Hong Kong, Argentina, Australia, Canada and Europe. He has also enjoyed extensive radio airplay and has releases with HyNGE and CMAU, along with a solo CD entitled “Outpost.” His compositions are recorded on Centaur Records, Frog Peak Music, Seeland Records, Aporia Records, Nebula Productions, and Angular Momentum CDs. His music can be purchased through iTunes and CD Baby.

If that weren’t enough, Michael also builds musical instruments, both software and hardware.

“I started this while I was at Mills College,” he said, “and although I haven’t done much instrument building lately, it is something I want to get back into when I get some free time. Some of these instruments are made out of walkers, the kind used by senior citizens. The instruments are a lot of fun to build and even more fun to play. My kids love them.”