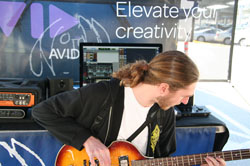 It may not be the Yellow Submarine, but when the John Lennon Educational Tour Bus came to DVC on February 9, nearly 500 DVC students jumped at the opportunity to tour it. For their efforts, they got a first-hand look at the gold standard of today’s recording industry.

According to Mark Steidel, DVC music department instructor and lead faculty for the college’s Music Industry Studies program, the educational tour bus is a state-of-the-art mobile audio and HD video recording and production facility, made possible by an agreement with Yoko Ono Lennon. Now in its 15th year, with the very newest technology and gear, the Bus is dedicated to providing young people with tours of the studios and participation in free songwriting and multimedia production workshops. 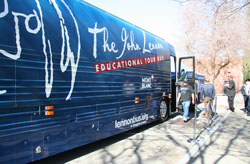 “The John Lennon Bus is nationally recognized,” Steidel said, “and it was a great opportunity for our students. The three John Lennon Bus crew members– Hans Tanner, Kyle Baudour, and Chris Walker – brought a wealth of technical knowledge that they demonstrated with state-of-the-art audio and video equipment. They also shared information regarding the vocational skills necessary to succeed as a professional in the music and digital media industries. It was a very informative day.”

The DVC Music Industry Studies (MIS) program became an official Avid-Sponsored School in August 2008, and it is because of that relationship with Avid– the principle sponsor of the John Lennon Bus– that the department was able to bring the bus to DVC. 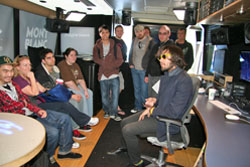 During the Lennon Bus tour, with the assistance of the three crew engineers, students learned how to write, perform, record, and produce original songs, produce and shoot music videos and documentaries, and complete a broadcast-quality music video.

As part of its contract with Avid, DVC and DVC MIS students can purchase Avid hardware and software with significant discounts.  Avid is the manufacturer of Pro Tools, a digital audio workstation platform for Mac OS X and Microsoft Windows operating systems, and the MIS program is also authorized to offer Pro Tools industry certification.

Pro Tools is widely used by professionals throughout the audio industries for recording and editing in music production, film scoring, film and television post-production. Knowledge of this software is required for all of those seeking internships and entry-level employment in the recording industry.

DVC offers four levels in a series of professional certification courses, designed by Avid to ensure audio engineers are equipped to perform at a professional level in the modern audio recording and music production industry. This certification helps employers to quickly identify prospective employees who have the necessary skills, and helps students by giving them the confidence they need and the assurance that they have an employable level of knowledge and skill. The certification is a major step for assuring that DVC’s MIS program stays current and relevant.

“Lennon” and “John Lennon” are trademarks of Yoko Ono Lennon.