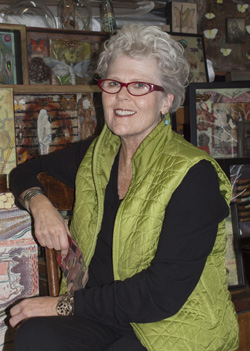 Joy Broom, retired art faculty from DVC, is currently the March artist-in-residence at the de Young Museum in San Francisco. Her exhibit, Waxed and Winged: Museum of Natural Curiosities, is on display until April 1, with the closing reception scheduled for 6-8:45 p.m. Friday, March 30.

Broom earned her BA degree and MFA degree in art from Washington State University. She began teaching at DVC in 1975, and taught for 32 years, retiring in 2007, though she continued to teach afternoon watercolor classes for several years.

Broom explains, “My first word was ‘bug;’ my first book was a Book of Insects. Even as a small child I made small elaborate habitats for various live specimens I’d collected.

“This installation is about my own compulsion to collect, combine and impose aesthetic order on natural ‘finds’ and disparate elements. There is certainly a broad reference in Waxed and Winged: A Museum of Natural History to the extravagant rooms of  ‘Cabinets of Natural Curiosities’ popularized for European royals and aristocrats in the 16th and 17th centuries. To me, these elaborate displays go far beyond the usual realm of science; they seem to evolve into elaborate reliquaries of darkly compelling human vanity.”

Her work, Broom says, reflects her own biography and travels. She said she first started using insects in her two-dimensional work during a month-long stay in San Miguel de Allende, Mexico.

“I would find huge, wondrous iridescent winged beetles dead on the street, and tuck them in my pockets to paint vivid watercolors of them every day after lunch.” She began expanding the use of the insect imagery with additional layers of other natural elements: seeds, trees, vines, thorns, cells, her body, organs, and cocoons.

“The pieces evolved out of my attraction to the icons, shrines, and altarpieces that are so a part of the Mexican Catholic culture,” Broom said. “Not having been raised in that faith, they seemed exotic to me.”

Her series of three-dimensional assemblage Insect Specimen Boxes began after a friend gave her an old damaged Butterfly Collection Box, and she began to incorporate actual insects into her artwork.

“I replaced the damaged insects with shape cutouts using my own drawings,” she explained. “This quickly evolved into the process of starting with my work, then adding specimens and actual natural elements in deepening collection boxes, which I’ve refinished and ‘aged’ with metal leafing. They have progressed from simple flat ryker collections to baroque, waxed extravaganzas of natural materials, riffing off my own artwork.”

While this may be a special field of interest, Broom works in a variety of media, including drawing, oils, watercolor and assemblage, and encaustics (using a paint mixed with melted beeswax, and after application, fixing with heat).

Broom has exhibited her work widely in the Bay Area as well as nationally. She has been awarded a Western States/National Endowment for the Arts Fellowship (WESTAF) for Works on Paper, and her work is included in the collection of the diRosa Preserve Art and Nature in Napa.

She has exhibited at selected solo or 2-3 person exhibitions at Studio Quercus in Oakland, A440 Gallery in San Francisco, San Francisco Museum of Modern Art Artists Gallery, Off the Preserve in Napa, K Gallery in Alameda, and Diablo Valley College. She has also had solo shows in Washington State, Seattle and Waitsburg.

As part of her in-residence stint at the de Young Museum, Broom said, “I invite Museum visitors to create a personal 3-D assemblage Specimen Box using natural (and unnatural) elements, layered with their own artwork created in the studio. I’m sharing a wide variety of collage resources from my own studio to guarantee unique, fun, and imaginative explorations.”