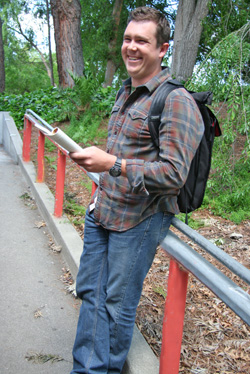 He helped to patrol the waters around Manhattan after Sept. 11, 2001. He went to New Orleans after hurricane Katrina, doing house-to-house sweeps looking for survivors. He traveled the high seas, helping capture drug runners. Now, after a decade in the U.S. Coast Guard, William Conable of Concord is at DVC, majoring in English and preparing to become a professor of English.

Originally from the East Coast, Conable graduated from Annandale High School in Annandale, VA, in 2000.

“I tried to enlist in the Coast Guard when I was 17,” he said, “but my parents would not allow me to, wanting instead for me to go to college. But the day after I turned 18, I drove my car to the recruiter’s office and enlisted anyway. My parents had no idea what I had done.” They did not come to watch him take the Oath of Enlistment.

“In hindsight,” he said, “going to boot camp in Jersey in the winter might not have been the best idea I ever had. It was cold– very cold.”

After boot camp Conable was ordered to Training Center Yorktown (Virginia), where in a 14-week course he was trained as a diesel mechanic.

“Since the Coast Guard is small,” he explained, “there is a significant amount of cross training that goes on.” Through the course of his time in the Coast Guard, Conable was qualified for positions too numerous to mention, from machinery technician, command intelligence officer and boat engineer to law enforcement and EMT.

“In July and August of 2001 I trained at and graduated from the Maritime Law Enforcement Academy, and became a bona fide federal law enforcement officer,” Conable said.

That was how he happened to end up in New York after 9/11.

“Seventy-two hours after the attacks, I volunteered and was sent to New York Harbor to help run patrols along Manhattan Island,” he said. “When I returned to Cape Charles, my station was tasked with helping to secure the entrance to the Chesapeake Bay, as well as the entrance to the Elizabeth River, where the Atlantic Fleet is home-ported.” He also volunteered to assist in the boarding of cargo ships waiting for entrance into Chesapeake Bay. Some of those boardings took up to nine hours as they searched for anything that was not supposed to be there, and any personnel not accounted for.

After Hurricane Katrina, Conable and three shipmates went to New Orleans. “We lived on a 41-foot UTB boat for three weeks” he said, “while we did house-to-house sweeps for survivors and helped ferry people out of the most damaged and flooded sections of New Orleans.”

His next assignment was aboard the CGC Morgenthau, which was home-ported out of Alameda, CA. While a member of that crew, he spent 273 days at sea in one year.

“We participated in 8-12 successful counter-narcotics operations where we captured several million dollars worth of cocaine,” he said. “We also were a part of several human trafficking rescues and several economic refugee cases. I was an EMT, so on the refugee cases, I assisted with attending to the medical needs of those we saved.”

The Morgenthau, Conable said, was also involved in the Cougar Ace case in Alaska. “The Cougar Ace was a large transport ship that lost her ballast and was actually floating on her starboard side,” he explained. “We assessed the vessel’s chances for salvage.” The ship was recovered and towed into Dutch Harbor, where she was righted by a private salvage company.

While on the Morgenthau, Conable said, he was deployed to Southeast Asia for six months, went through the Panama Canal, and made a stop at GITMO. He saw 17 different countries in Central and South America (Panama, Guatemala, Costa Rica, Ecuador, El Salvador, Mexico, Chile, and Cuba-Guantanamo Bay) and Southeast Asia (Brunei, Malaysia, Thailand, Philippines, Guam, Vietnam), as well as the Caribbean, Dutch Harbor, and Canada.

Conable said he read a lot while in the coast Guard.  “I would go to the reading lists for Yale, Harvard and Columbia universities that were posted on their websites and read the required texts that I had access to. I later realized that I was only reading and wondered what I was learning, so I started to write essays about what I read. Unfortunately, they were really terrible essays.”

He was able to take three college courses while at sea, with the professors sailing with the crew, giving lectures in the helo hangar and teaching them between their watches. It was on board ship that  Conable decided he wanted to be a professor.

He left active duty service on July 13, 2010, and—having missed enrollment for the fall term—enrolled for spring term 2011 at DVC, majoring in English, with his focus on literature theory.

“If I am accepted at St. Mary’s, I will transfer without an AA degree,” he said. “If I stay another term at DVC, it seems I will earn my AA whether I meant to or not.”

His top choice transfer school is St. Mary’s because of its smaller undergraduate English program. “After that I will apply for graduate work at UC Davis. They have an amazing faculty that I think rivals that of Berkeley.”