The contest, which was inaugurated in 1962 by San Francisco State University professors K.Y. Xu, Leo Chen and Maurice Tseng, is open to all Bay Area Chinese language students of various levels, from elementary to university. The contest is challenging and enjoyable, and over the years has evolved into the present-day Mandarin speech contest.

It is the largest of its kind in the country. 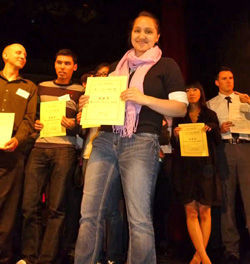 Six hundred fifty students participated in the event, held in April at Lowell High School in San Francisco. The contest is sponsored by the Chinese Language Teachers Association of California, a nonprofit organization whose goal is to promote Chinese language teaching and learning in California.

First-term students with no background in Chinese:

Second-term students with no background in Chinese:

Fourth-term students with no background in Chinese:

Fifth-term student with no background in Chinese:

Bridget Poon, DVC fifth-term independent study student, won the Best Eloquence Award at the 11th annual “Chinese Bridge” Language and Performance Competition. Held at San Francisco State University in April, it was hosted by the Confucius Institute at SFSU and co-sponsored by the Consulate General of the People’s Republic of China.

Poon’s unique award is offered to only one student per year.  This is the second time a DVC Chinese student has won the special honor, the first being Jessica Stewart in 2008.

According to Chinese professor Sheree Lin, Chinese is currently one of the most popular languages to learn. DVC offers CHIN 120, 121, 220, 221, and independent study. Lin extends thanks to Lily Miao, speech consultant, to all the DVC instructors of Chinese, department chair Professor Izquierdo, and Michael Almaguer, dean of the Applied and Fine Arts Division.