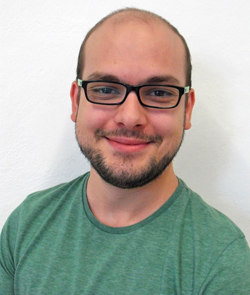 Students who attend Diablo Valley College are well aware that DVC prepares them to transfer to four-year universities, such as UC Berkeley, CSU East Bay, and UC Davis. But they might not know that their options aren’t limited to area universities. In fact, they may transfer to schools half-way around the world . . .

That’s just what Daniel Lopez Mongay did. Daniel is originally from Palleja, a small town in Spain close to Barcelona.

“I graduated from high school in my hometown in 2006,” Daniel explained. “I first started to study political science at the Autonomous University in Barcelona, but I didn’t like it there, and that’s when I decided to study in the U.S.” He was helped in his quest by Kathy Kennedy, who works for DVC recruiting students in Europe, Turkey and the Middle East.

Daniel moved to the Bay Area at the end of 2007, first to live with a home-stay family in Walnut Creek, and then to an apartment in Pleasant Hill.

After arriving in the Bay Area, Daniel studied for the first six months at the International Education Center at DVC, where international students study English to get to college-level English. He then enrolled at DVC in the fall of 2008, majoring in psychology.

Daniel studied at DVC for five semesters, then transferred to the University of New York in Prague (Czech Republic) in the spring of 2011. Since DVC has a transfer agreement with UNYP, most of his credits transferred, including his general education and psychology major classes.  (Kathy Kennedy noted that DVC also has a transfer guarantee with the American Business School in Paris, and is making new transfer agreements with schools worldwide all the time.)

“The most important thing to me is that I’m closer to my family and friends in Spain,” he said. “California is a long way from Europe, so being able to catch a two-hour flight to Barcelona (from Prague) is very convenient. And Prague is a beautiful city in the heart of Europe, with lots of tourists, lots of international people, and lots of stuff to do. It is close to a lot of big cities like Vienna, Munich and Berlin. Prague also has a great public transportation system, which you don’t have in California.”

Overall, Daniel said, he likes being at UNYP, but “The language barrier sometimes is a problem with the native citizens. I don’t speak Czech, which is an extremely difficult language. And culturally speaking, Czech people are also more closed than Spaniards or Californians—they are colder and more reserved. And in terms of the university, we are in a great location but in a small building, which is getting too small for the number of students. This creates organizational issues that the management is trying to solve.”

Other than that, he said, the experience is not that different from attending college in the U.S.  “I think the main difference is about people,” he said. “In UNYP there are not many American students. Most of the students are Czechs, Slovaks, Russians or from other eastern countries. This makes a difference from the experience I had at DVC. Another of the biggest differences is about the teachers,” he continued. “American teachers are the best ones I’ve ever had. At UNYP we do have great American teachers, but the European teachers are another story. Their teaching style is not the same as the Americans, and for me, it is a challenge.”

Daniel has been able to go home twice a year, at Christmas and in the summer. He expects to finish up in spring 2013. “I’ll start my senior year next term,” he said, “and will earn an American bachelor’s degree from SUNY Empire State College.

So what should students know before they enroll overseas?

“I would really recommend that students visit the city for a week, if possible, to see how it feels and if it’s what they’re looking for,” he said. “The cultural shock can be important if you have never been outside the U.S. And the winters can also be a shock,” he laughed. “If you live in Pleasant Hill, don’t expect such a nice winter in Prague, where it gets down to 5 degrees F.

As for UNYP, he said, “I really, really recommend that you visit the university, and talk to students. It’s a great university, but it has its problems. If you learn about them beforehand, you’ll be able to decide if it’s the right place for you or not. It is not worth going to a place if you will not fully enjoy your experience, so get well informed beforehand.”

But when all is said and done, Daniel said he would recommend it.