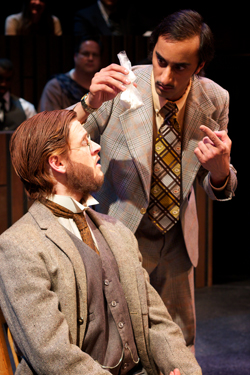 The DVC production of “The Last Days of Judas Iscariot,” directed by Nicole Hess Diestler, was selected as one of seven productions to perform a scene at the Kennedy Center American College Theatre Region 7 Festival to be held in Fort Collins, CO Feb. 13-17, hosted by Colorado State University.

Thirty regional college productions were initially considered out of more than 200 productions, and only seven were chosen to showcase a scene at the festival. Beth McBrien’s “Comedy of Errors” was also under consideration. 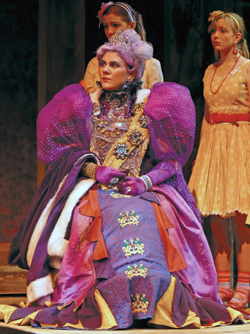 drama students to the regional festival where they will compete for national merit scholarships, and will also have the opportunity to interview for professional training companies and institutions. Cost is about $500 to $800 per student, and the drama department will be holding fundraisers to help students defray the cost.

The students have begun choosing scenes and preparing monologues for the competitions. DVC drama also has a technical theatre team that will be competing in the Tech Olympics at the festival and a student director who is involved in the Director’s projects - a high honor for a college directing student.

The KCACTF sends respondents to each show within the region, and from each production, the respondent chooses two student actors whose works are deserving of special recognition. These students become the Irene Ryan candidates, and are invited to participate in the regional finals held at the KCACTF festival.

“We are proud that this year, DVC drama received more than 40 different awards and recognitions for its 2010-2011 season,” said Diestler.