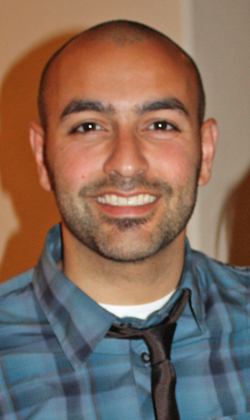 Born in Indiana, Hanna moved to New York when he was eight months old. In 1995, he moved to California, and graduated from Monte Vista High School in Danville in 2001. He enrolled at DVC that summer, choosing it simply because a couple of his friends were either already enrolled or planning to enroll for the fall term.

It was a good choice.

“I loved the professors, the class size, and the overall campus environment at DVC,” Hanna said. “I used to ride my long board all around campus. I also liked the proximity to the mall - I worked at Zumiez in the Sun Valley Mall.”

He majored in psychology, and after two years transferred to UC Davis without a degree, having fulfilled the IGETC (Intersegmental General Education Transfer Curriculum) at DVC. He earned his Bachelor’s degree in psychology from UC Davis in 2005, and pursued his Master’s degree at St. Mary’s College.

He currently works as an Academic and Career Counselor at Cal State-East Bay.  “Higher education is extremely important these days,” he said. “Going to college is a MUST! You gain valuable life experience as well as expanding your knowledge base in different disciplines.”

DVC brings back great memories for Hanna. “I had certain professors that I will never forget,” he said. “Mr. Henry Hall was my humanities professor in the summer of 2001, right after I graduated from high school. He was probably the best professor I’ve had in my entire undergraduate and graduate career! I learned so much from his classes, and he was the funniest professor ever. I still keep in touch with him when possible.

“Mr. David Vela was my English 126 instructor in the fall of 2001,” Hanna continued. “I had his class on the morning of September 11, 2001. It was such a powerful and emotional class, and I remember it so vividly. We set aside our curriculum for that day and just talked about what happened and what was happening. He was such a knowledgeable professor. A class I will never forget!”

“I would ABSOLUTELY recommend DVC!” he said. “I got a valuable and quality education for an extremely affordable price. DVC provided me the necessary experience to transition well to a four-year university. I hope one day to work as a counselor at DVC.”