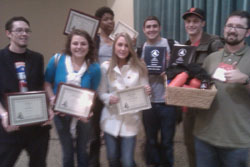 The Diablo Valley College student newspaper, the Inquirer, won online and print General Excellence awards for work done in Spring 2011. The awards were presented at the Northern California conference of the journalism Association of Community Colleges held Nov. 12 at California State University-Sacramento.

Eighteen schools and about 219 delegates attended the conference. Keynote speaker was John Ortiz, who graduated from Sacramento State University at age 40, and for eight years has been covering state workers for the Sacramento Bee.

Eight DVC journalism students attended the conference along with their adviser, Mary Mazzocco.

“It was very gratifying to win both online and print general excellence awards,” Mazzocco said. “The students put a lot of thought into how to make the Inquirer better serve the DVC community, and I think it paid off.”