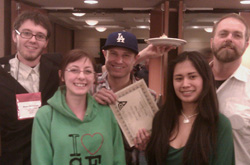 The DVC student newspaper, The Inquirer, won a General Excellence award for its print edition at the state convention of the Journalism Association of Community Colleges, in Burbank. The Contra Costa College Advocate also won General Excellence and Pacesetter awards.

The convention’s keynote speech was given by Ruben Vives and Jeff Gottlieb, the Los Angeles Times reporters who broke the City of Bell salary scandal and won a Pulitzer Prize for their efforts. More than 500 delegates from 45 community colleges attended the conference.

“It was a great convention and a wonderful showing, especially in competition with the larger Southern California programs,” said program adviser Mary Mazzocco. “I’m very proud of our students, who worked hard for the General Excellence award.”