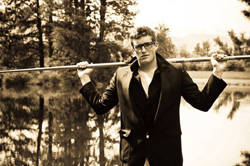 DVC freshman Logan Connors, a javelin thrower for the DVC track and field team, was named the Big 8 Track and Field Athlete of the Week for the week of March 4.

He was the champion at the Beaver Relays on March 3 at American River College in Sacramento, with a throw of 189 feet, three inches. It was the best throw in Northern California and currently the number two throw in the state.

“This is pretty cool, and a little surprising,” Connors said. “I feel really blessed to get the honor after my first competition in college.”

Connors came to DVC from Corvallis, Montana to play football at DVC. He played football for Stevensville, MT, where his dad was the football coach for his freshman through junior years of high school. When his father stopped coaching just before Logan’s senior year, he transferred to the high school in Corvallis for his senior year of football. After graduating from Corvallis High School in 2011, Connors came to California, and said he started workouts with the football team last June.

According to football Coach Mike Darr, Connors is a “strong-armed quarterback, and will be competing for the starting quarterback position in the fall.”  Connors also is an excellent student, with a GPA of about 3.7.

“I came to DVC because of the reputation of Coach Darr and the football program,” Connors said, “as well as its ability to help on the field and in the classroom.”  He is majoring in business transfer.

“DVC is pretty awesome,” Connors said. “The diversity is really different from where I come from, so I like being able to have such a different experience.”