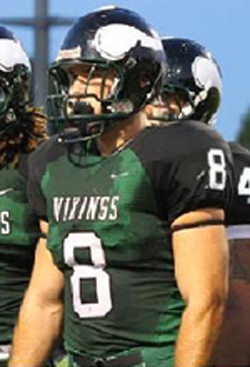 Morgan Breslin, a sophomore defensive lineman for the Diablo Valley College football team, was the subject of a recruiting frenzy of all the top four-year colleges late in the fall term. He recently accepted a full scholarship to USC and transferred there for spring term.

Breslin was born and raised in Walnut Creek, and is a 2009 graduate of Las Lomas High School. He played fullback and defensive line in high school football in 2007 and 2008, and also played rugby. He suffered a broken bone in his foot while playing rugby in the spring of his senior year and was unable to participate in sports the next year, so he was a “grey shirt” at DVC his first year.

“Basically, I wasn’t able to play football in the fall of 2009 because of my foot, and I didn’t want my Division One clock to start. A ‘grey shirt’ is someone who is taking classes, but is not a full time student so their clock doesn’t start. I took fewer than 12 units so I wouldn’t be considered a full time student. Then in 2010, I came in as a freshman.”

That year, in his first year of play at DVC, he led the state of California in sacks and tackles for loss, and was selected to the All-State football team.

This year, Breslin was selected a pre-season All-American by the Sporting News. He is considered one of the Top 10 Junior College recruits in the nation, and received scholarship offers from more than 25 Division I schools, including most of the Pac 10.

Not only is he a great football player, but Breslin, who is majoring in Humanities, is also a good student, with a 3.0-3.2 GPA overall. He said academics played a key role in his decision to play at USC.

When asked what he liked about DVC, Breslin said, “All the players that I saw almost every day at DVC, as well as the coaching staff. And being in Ms. Koblik’s art history class. She is my favorite teacher of all time.”

“I would recommend the community college route to any athlete who didn’t have offers coming out of high school,” he said. “Sometimes it takes a guy an extra year or two to develop. At a junior college you give yourself every opportunity to get a chance at the next level. You’re playing at a high competition that’s a lot different than high school, so you can show off your talents and prove to other coaches that you’re capable of playing at a higher-caliber level.

“DVC helped me a lot by giving me an opportunity to continue to play football. For me it was a second chance.”

As for his future career goals, Breslin admitted, “To be honest, I have no idea. I would love to be able to help athletes develop their skills and train athletes to help them get better. I’m not sure if I’m going to continue in humanities. I will just stay in school and get a degree, and play football for as long as possible.”