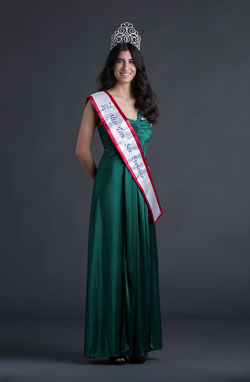 Sabrina, a lifelong resident of San Ramon, enrolled at SRC in 2007 at the age of 13.

“I was going to Venture, a homeschool independent study school, and was given the choice to be concurrently enrolled in another high school or a community college,” she said. “DVC stood out to me as the perfect place to go because the San Ramon campus is so close to my house, and I heard that they have amazing teachers as well. So I enrolled.”

She continues to study at SRC, majoring in civil engineering. “My objective is to earn enough credits to transfer to Cal Poly in the fall of 2013,” she said.

The Miss Teen San Francisco competition was new for Sabrina; she had never competed in a pageant before. There were three parts to the pageant: an interview, casual wear, and formal wear with questions. About 180 girls were at the Chabot College Performing Arts Center, coming from Sacramento, Santa Cruz, Monterey, and all over the Bay Area.

“The interview took place at the Hyatt Regency in South San Francisco the day before the actual pageant,” Sabrina said. “At our training class a week prior to this, our coach told us that we had to ‘ROCK our interview,’ because this is the tie-breaker for who is chosen as the winner. There were three judges at the interview, and they were very friendly, down-to-earth people. They asked me questions about myself, how old I am, what career I want to pursue and why, what things I value in life, and to describe myself, among others.”

“Since there were four age-group categories (junior preteen, preteen, junior teen and teen) it took a while to go through the casual and formal wear and the questions. After my group, the teens, finished, everyone was brought out on stage so Miss Congeniality, Miss Photogenic, and the Top Ten contestants could be announced for each category.”

Sabrina, who competed in the teen category, was named one of the Top Ten.

“We were so hungry and excited!” she said. “The Top Ten contestants are all eligible to go to the Nationals, but only the winner gets everything paid for, which includes the airfare and the week-long stay at the five-star hotel in Orlando.”

When the contestants went back on stage after a brief intermission, they were each asked a random question; the judges would use the contestants’ answers to make their final decisions.

“They announced the fourth, third, second and first runners-up, and my number wasn’t called, and I thought I wasn’t going to win anything,” Sabrina said. “When they started announcing the winner and finally called out my number, I was so shocked I thought I didn’t hear the announcer correctly. I couldn’t believe it—I won!”

Sabrina received several gifts from the judges, but she is happiest to be able to go to the national pageant in Florida next December and compete for Miss Teen USA 2012. In the meantime, her main responsibility will be to represent the Bay Area as Miss Teen San Francisco.

“Although I won, which is an amazing honor,” Sabrina said, “I would have to say the best part about the whole pageant was the experience of meeting new girls and making new acquaintances. The contestants were friendlier than I expected. I thought the majority would be prima donnas, stuck-up fake girls, but I turned out to be very wrong. I became close to two girls in the pageant, and one of them made it to the Top Ten, so I can’t wait to see her for the Nationals next year!”