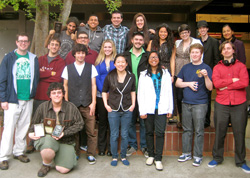 The DVC speech and debate team participated in the California Community College Forensics Association state tournament in March in Concord, and brought home 10 awards. Twenty seven community colleges from around the state participated.

Michael Murray won two bronzes, one each in Parliamentary and Lincoln-Douglas style debate.

The team is coached by faculty members Becky Opsata and Patrick Moe.

“I am proud of the hard work and dedication of our team this year,” said Coach Opsata. “Our strong showing at State was a fitting end to a very successful season.”