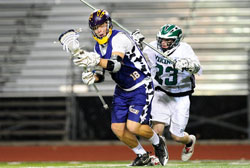 DVC's Viking Lacrosse Team has no fear. With a ‘take no prisoners’ attitude, the team held its first DVC Winter Classic tournament Dec. 3, knowing it had invited the top three pre-season favorites in the West Coast Lacrosse League, Division II—St. Mary’s College, UC Santa Cruz, and the University of Nevada-Reno.

In the past three years, St. Mary’s and Santa Cruz have battled for the conference title, with St. Mary’s winning two of the three championships.

DVC Coach Jon Skinner set the tone for the tournament with a pre-game pep talk to DVC players and coaches. “Today,” he said, “we will face the biggest test yet in Viking Lacrosse history. Our mission is clear: a clean sweep of all four games. This is our day!”

And their day it was.

DVC first faced the St. Mary’s Gaels, and at half-time, led 3-2 in an evenly-matched, hard-fought game. Tension was high among Vikings fans in the stands, as the Vikings typically do not do well in morning games. St. Mary’s quickly scored a goal in the second half to tie the game, but the Vikings scored the final two goals, defeating the Gaels 5-3.

The second game followed immediately, with DVC taking on the University of Nevada-Reno. Reno scored the first goal, but the Vikings then went on a 7-1 tear to win the game, 7-2.

In the third game the Vikings faced UC Santa Cruz, and a win would guarantee a spot in the tournament final. The Vikings sprinted to a 4-1 halftime lead, and just after the half, Sebastian Darby and Ross Doolittle both scored, putting the game out of reach for the Banana Slugs. The final score was 8-4 in favor of DVC.

Not surprisingly, the final game came down to a rematch between the Vikings and the Gaels of St. Mary’s. This time, the Gaels came ‘loaded for bear’ with a different strategy to try to double team Viking lead scorer Jarret Hassfeld. But when Hassfeld saw the double coming, he recognized the open Viking, Sean Lockner, who ripped four of the first five Viking goals of the game. Hassfeld scored the next goal by rocketing a shot clean through the All-League Gael goalie’s legs from 20 yards out to extend the Viking lead to 5-1. The Gaels had no answers for the Viking offense or defense. The Vikings won 7-1 and prevailed as tournament champions.

The team thanks the 500 fans of all teams who came throughout the day to watch the play; the 200 fans who tuned in from all over the country to watch to the live webcast of the game; and the team parents, volunteers, family and friends. The team also thanks the players and coaches from St. Mary’s Santa Cruz and Reno for their heartfelt play.

Prior to the DVC tournament, the Viking team had compiled a season record of 10 wins, 5 losses, with four of those losses coming in two tournaments in which they played four of the elite Division I lacrosse teams in the country.

The Viking Lacrosse team also racked up big points in the city of Pleasant Hill, coming out in force on Community Service Day to work at Gregory Gardens Elementary School. Team members put in about 160 hours of work beautifying the school grounds.

As a thank you, the Gregory Gardens PTA, school families and teachers came out and braved the rain to show appreciation and support the Vikings at their Nov. 5 game, which culminated in a victory over Division I team Santa Clara University. Following the game, the PTA hosted a hamburger feed for the Viking players.

Gregory Garden PTA president Shurleen Martin said, “The players were all very courteous, and a few took the time at the very end to sign lacrosse balls for the kids that were still there. They were thrilled. My son even took his ball to school to show his teacher and the principal.”