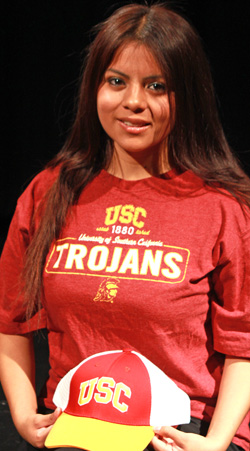 Yesenia Morales has a dream. She wants to inspire others, and she wants to do it through making films. She is well on her way.

Born in Sacramento, Morales grew up in Brentwood and graduated from Liberty High School there, before her parents moved to Oakley. After graduation she enrolled at Diablo Valley College in the fall of 2007.

“My friend who went to LMC told me about his experience being in Puente, and told me to research the Puente program at DVC,” Morales said. “In the summer of 2007, I had a counseling appointment and interview with Lupe Dannels and Rita Delgado to enter the Puente program, and discussed my future plans with them. I was accepted for the fall 2007 Puente cycle, and so got involved my first term at DVC.

“The Puente staff and the Puente program have been a blessing, an opportunity, and a group of people who I can call family,” she continued. “Being a first-generation college student, I did not know anything in regards to universities, degrees and ways to fund my education. The staff at Puente helped me tremendously. Rita Delgado and Lupe Dannels were my counselors, and helped me figure out which 4-year university I wanted to transfer to, what long-term and short-term goals I had in mind, and connected me with people to obtain internships, which were usually with former Puente students.

“The English instructor, Patrick Leong, helped me polish my writing and critical English skills,” she continued. “He comes from a communications and media production background and knew how to help me polish my writing in terms of organizing and coming up with ideas to focus on. The literature and topics discussed in his Puente English class transferred to the type of ideas in writing and filmmaking I want to pursue, and his English class is where I developed my storytelling.”

Morales majored in communications, and earned an Associate in Arts degree at DVC before transferring to UC San Diego in the fall of 2010.

“DVC is a great community college,” Morales said. “This campus, DVC, and its Puente program are where I developed the freedom and security to develop my hopes, dreams and goals. Every class was engaging,” she continued, and said she feels the professors really care about their students and their learning.

“Student services at DVC are excellent as well,” she said. “The resources I used to be able to continue studying were EOPS and financial aid. In order to polish up my resume I joined the Alpha Gamma Sigma honor society, and Leslie Mills at the DVC scholarship office was always of great help and an excellent resource.”

“I was always interested in media,” Morales said, “and originally, I wanted to be a news reporter/journalist. At home we always had a movie playing in the background. My stepdad is a huge film geek, and growing up in a house where it’s all about going to the movies or renting home videos and DVDs and watching them as a family played a role in my being interested in media. But I came to the decision of changing from a journalism career to filmmaking when I took a ‘Latinos in the media’ course at UC San Diego with Professor Curtis Marez. I had a curiosity for film, but through his lectures, Professor Marez sparked something in me I didn’t know I had, and it was in his class that I confirmed my passion for filmmaking and wanting to pursue that inner instinct.”

She became involved in filmmaking while at UCSD with her professor and independent filmmaker Zeinabu Davis as her mentor.

“She knows of my interest in accurate and positive representations of Latinos in the media and film,” Morales said, “and she shares the same interest as I have to express where you come from, and to share your personal story and make it come across in film.”

Morales made a film, beaYOUtiful, about a young woman who wants self worth and respect for her intelligence and who she really is, and not just because of her beauty. She used this film in her portfolio application to the University of Southern California.

She also made a film, Bachata, which shares the popular dance style of Bachata and how the dance itself is a sign of resistance against the oppressive regime of the dictator Trujillo. The film won a grant award, and Morales will continue to develop it in her graduate studies.

What led her to do these films?

“I started to think about the Latino population and how it is steadily progressing towards the majority,” she said. “That is creating an opportunity and necessity for filmmaking and storytelling of bilingual and bicultural individuals’ experiences, created by people of diversity in the United States. It is my determination to fill in the gap of knowledge by creating a presence and visibility of Latinas in the U.S. Through filmmaking, I hope to create unity in the Latina struggle to understand ourselves and each other instead of going unnoticed and invisible. I want my media work to be a space for critical thought of gender, race, and sexuality of young Latinas. The purpose of the stories I create is to make positive, lasting change within ourselves, our respective communities and our families.”

Morales has been accepted into the Master of Fine Arts program at USC’s School of Cinematic Arts, and will start in the film and TV production program in the spring of 2013. Her focus within the program will be in directing.

“USC’s School of Cinematic Arts provides the ideal location and facilities for me to learn more with faculty who work in Hollywood, and who I hope will influence me with creativity and good advice,” Morales said. “For the next three years I’ll be working on crafting my storytelling and deciding whether I will pursue directing, producing or scriptwriting. In all honesty, I want to pursue all of them. In the media classes I took at UC San Diego, I was exposed to all of these positions and I enjoy them all. My career goal is to create stories and characters in the media that the younger Latino generation can look up to and truly relate to. The purpose of my work is to break stereotypes.”

As for her future life goals, Morales said, “I want to have a successful career in the media industry in Los Angeles, and to continue making my family proud and setting an example for my two younger siblings.

“I want young people to know that nothing is impossible; you just have to put your mind, heart and strength to whatever your dream is and believe in yourself. It’s all about sacrifices, but in the end it’s worth it. I want them to not be afraid of failure, because that is part of the learning process, and figuring out who you are and what you want to do in life is all a learning process.

“Always pursue what makes you happy, even if people doubt you or think your ideas are crazy,” she concluded.  “I always went in search of what made me happy, and my happiness is seeing the final video completed. One of my life goals is to inspire others, just as the Puente staff at DVC and my parents inspired me to go on to fulfill my dreams.”