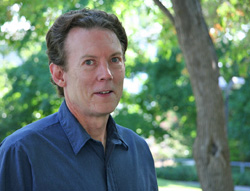 “I had been wanting to get involved in my community for some time, and when the timing and the needs of the city presented themselves simultaneously, I jumped at the chance,” Abele said.

A City Council representative told him the city needed a new Commissioner for Human Relations. Abele said, “That was a perfect fit for me, since the mission statement of the Commission concerns the ethical issues of fostering equality, diversity, and justice.” He had an interview with all nine members of the City Council in January, was voted in, and took office in February.

“Also,” Abele said, “our Commission is seeking to foster relationships with our neighboring cities of Albany and Richmond. We are currently in the process of setting up meetings between our respective Human Relations Commissions to plan mutually beneficial events to foster justice and equality at all levels of discourse in our cities.”