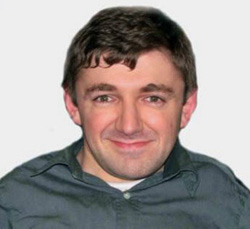 Aaron Isaacson of Danville is a big fan of DVC and an even bigger fan of its WorkAbility III program.

Isaacson grew up in the Bay Area, attending Valley Christian High School in Dublin. He started taking classes at DVC while a senior in high school, and after graduating in 2000, enrolled at DVC full time.

He was a student at DVC until January of 2002, when he transferred to CSU-Hayward, where he earned a B.S. degree in Business Administration (accounting) and a minor in English, graduating in June of 2004.

Soon he was on to law school at Regent University in Virginia Beach, VA, graduating with a Juris Doctor degree in May 2007. He passed the California bar exam in July 2007 and was admitted to the California Bar in December 2007.

After being admitted to the bar, Isaacson looked for a job, which in early 2008 was hard to come by. Between applications, he worked as a solo practice attorney, taking on a variety of cases ranging from court-appointed criminal defense to civil litigation, estate planning and family law. “I found it easy to find clients,” he noted, “but difficult to find those who could pay.” With the costs of doing business rising, and no job prospect on the horizon, he was referred to WorkAbility III.

Soon he was back at DVC, this time with the WorkAbility III program. 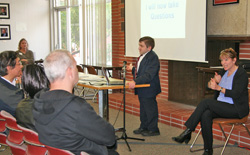 “I was referred to WorkAbility III by the California Department of Rehabilitation,” Isaacson said. “I started with them in November or December of 2010, and took an update course on Microsoft Word in spring 2011.

“The WorkAbility III counselors were helpful in explaining to me the Schedule A hiring process in the federal government, which is a special hiring authority whereby the federal government can hire individuals with disabilities. I learned a lot about various hiring practices and current trends in the job market,” he said. “The counseling staff also were very good at holding me accountable to maintain the momentum of my job search.

“Unemployment can be extremely demoralizing,” he continued, “and after you have collected a stack of rejection letters, it can become difficult to keep applying. The regimen of bi-weekly meetings with the WorkAbility counselor helps to provide structure and accountability. In particular, my counselor, Sue Arnett, was great at working with me. She introduced me to the Schedule A process, and to the networking circles that eventually led to my current position. The WorkAbility III program helped me to find a job.”

That job is at the U.S. Mint in San Francisco, where Isaacson works in the Equal Employment Opportunity (EEO) office, and is also the Disability Program Manager for the San Francisco Mint.

“As an EEO specialist, I work in labor law compliance issues and complaint processing,” Isaacson explained. “As the Disability Program Manager, I work to ensure that reasonable accommodations are made for our disabled employees.”  He recently presented a workshop to DSS students on the DVC campus on “How to Apply for a Job in the Federal Government.” The workshop was specifically tailored for students with disabilities.

Isaacson said he believes DVC is a great institution with a lot of resources for students. What would he say to current high school students?

“If you are proactive in your planning, you can receive a world class education,” he said. “The key to success is to know your educational goal and then work with the staff counselors to plan out the steps required to achieve that goal. DVC can be a great tool to help in the building of your future, but unless you put forth the effort, that tool will be useless to you. Being proactive and planning are key; aimlessly enrolling in classes will not help your career.”

What about his own future?

“I love working at the San Francisco Mint, and I plan on staying here as long as they have a position for me,” he said. “Eventually, I would like to teach a night course at DVC, possibly on business law or criminal justice. I enjoy the collegial atmosphere of the campus, and I would like to always stay connected to the school in some way. And I recently got married, and my wife and I hope to eventually have a family.”