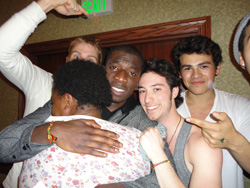 They were among 32 DVC drama students who attended the Festival to compete against undergraduate, graduate and PhD students from throughout the KCACTF region, which includes Colorado, Wyoming, Montana, Idaho, Washington, Oregon, Alaska, northern California and northern Nevada. 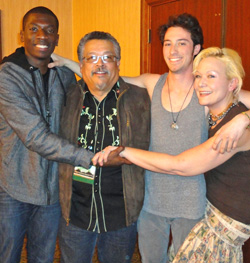 The DVC students were accompanied by drama faculty Ed Trujillo and Nicole Diestler to the Festival, which was hosted by Colorado State University in Fort Collins, CO, Feb. 13-17.

Udom and Smick have advanced to the nationals, and will be competing at the Kennedy Center in Washington, D.C. for national scholarships, awards, money and merit. The competition is limited to advancing only two students per region, so just 16 students from all colleges and universities in the United States will compete. Diestler, as the DVC students’ acting coach, teacher, and mentor, is required to accompany them to the nationals. As part of the regional award, the KCACTF will pay for airfare and lodging for the students and provide them with a $25 per diem.

The other DVC students attending the festival were successful as well, according to Diestler, as nearly all of them received offers and interest from top-ranked transfer institutions and professional training programs. A handful of DVC students were offered full rides, stipends or tuition waivers from Northwest Regional institutions. 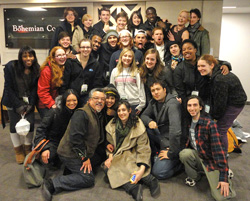 Other Festival awards to DVC students:

Ed Trujillo began DVC drama’s involvement in the festival more than 18 years ago, and each year he has attended, prepped the students, and advocated for educational advancement for DVC students. Diestler began helping Trujillo with the KCACTF festival shortly after accepting her faculty position at DVC six years ago. Both Trujillo and Diestler volunteer their time, efforts, personal finances and mentorship to provide this festival opportunity, assisted by every drama staff and faculty member as well as faculty volunteers.

“For the DVC students, this was more than a festival,” Diestler said. “This experience bonded us, validated us, and opened doors for future educational and professional endeavors. Futures were changed! Several DVC students made connections with transfer institutions and training programs—they were sought after and recruited like superstars. What a glorious and life-changing week.”

Fundraising activities will be held in the near future to help pay flights and accommodations for the two faculty members, as well as for daily expenses such as airport transfers and food.