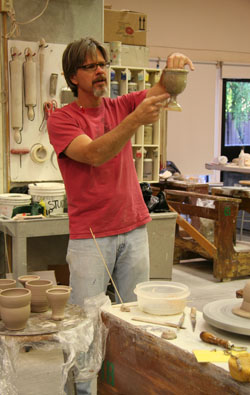 Mark Messenger, in his 17th year as a professor in the DVC Art Department, spent six weeks of his sabbatical in Greece last summer in an art residency program called the Skopelos Foundation for the Arts, or ‘SkopArt.’ He wrote about his experiences, and the story was published in Ceramics TECHNICAL No. 34 for 2012.

Located on the Greek island of Skopelos just off the northern mainland in the Greater Sporades, SkopArt provides studio space and arranges accommodations in, as Messenger says, “a well-equipped, low-key and incredibly beautiful environment.” What makes it significant for artists, he says, is that “its unique collection of attributes fosters personal inspiration.”

Skopelos, according to Messenger, “is one of the greenest islands in the Aegean, with a reputation for its grapes and olives reaching back thousands of years. It is a particularly conducive setting for concentrated investigations in ceramics, painting, printmaking, performance or writing either as an individual or as a part of a study group.

“In my experience,” Messenger continued, “ a dramatic change of environment (such as a residency provides) makes it difficult to rely on old patterns of behavior. And poignant first-hand encounters, even if brief, can constitute profound influences. Some might argue that there is a marked difference between sensual novelty and dedicated creative research, but I contend that it is possible to seek the best of both worlds–a substantial period of fresh investigation and reflection as well as exotic interaction.”

The international studio was founded by Gloria Carr, who first visited the island in 1996 and thought it an ideal location for a studio. Carr earned her MFA in printmaking from Pratt Institute in Brooklyn. She participated in a number of group studios, exhibited her artwork broadly and spent 17 years as a consultant and editor for the Smithsonian Magazine in Washington,  D.C.

Messenger said there are two categories of residents at SkopArt—individuals, who may come alone or as collections of friends working independently; and organized groups, which are often affiliated with institutions and are earning credits. Once on the island, students alternate between lectures, demonstrations, studio time, field trips and personal exploration.

“SkopArt’s programs are designed to support each resident’s holistic experience,” Messenger said. “In the late spring, summer, and early fall when the allure of ancient history and artistic precedent are framed by expansive vistas of warm, vibrant light, this experience extends far beyond the studios’ 24-hour access.”

For Messenger, his residency took on even greater significance when he visited the workshop of internationally-known potter Nikos Rodios, who lives on Skopelos Island. He got to know Rodios, and later wrote an article about him and his work, as well as a brief study of Greek pottery, that was published in Ceramics Monthly magazine.

Rodios’ artwork, Messenger said, proceeds from that of his grandfather, father and uncle, all of whom were internationally known for their ceramics, having won a gold medal at the World Fair in Paris, maintained contacts with galleries in Athens and being widely known throughout Europe.

Nikos, for his part, studied in Athens after high school and worked there as an engineer. According to Messenger, neither Nikos’ father nor uncle pressured him as a boy to get into pottery, but a small wheel was set up where he could play and, in time, he was throwing complex shapes. He recalled that something interesting was always going on in the shop. When Nikos’ uncle died in 1977, Nikos returned to Skopelos to work with his father, and since his father’s death in 1991, Nikos and his wife have continued the Rodios’ legacy.

“I went to Greece for inspiration and to work on my art,” Messenger said. “I also came away with an education on form from a master potter, as well as new friendships. It was the experience of a lifetime.”