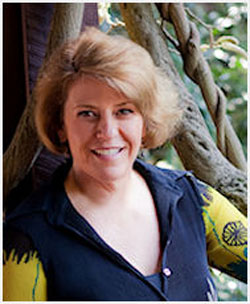 Jessica Inclan Barksdale, DVC English faculty member, is a 2013 winner of Carve Magazine’s Esoteric Awards writing contest. This is the magazine’s newest contest, and each year the theme changes to reflect an esoteric topic. This year’s theme was Natural Disaster.

The three winners for 2013 were Barksdale, of Oakland, with “The Possibility of Fire;” “Higher Ground,” by Karen Celestan of New Orleans, LA; and “Storm in a Teacup,” by Dan Powell, United Kingdom. The winners each receive $1,000 and will have their stories published in the spring 2013 issue on March 15. This will be the magazine’s first nationally-distributed print edition.

“The Possibility of Fire” is the story of a woman who is taking care of her abusive ex-husband after he has a stroke. It contains a flashback to the Oakland Hills Fire, the time when she realized her marriage was not what she’d hoped for.

“It feels wonderful to win this award,” Barksdale said, “though it’s too bad I have such a knack for writing about what goes terribly wrong!”

She is the author of 12 traditionally-published novels, including three best sellers, as well as six e-books and a women’s studies textbook. Her work has been translated into Spanish, Portuguese, Dutch and Czech. She has also written short stories and poems, and is a recipient of the 2002 CAC Artist’s Fellowship in Literature. She holds degrees in sociology and English literature from CSU Stanislaus and a Master’s degree in English literature from San Francisco State University.