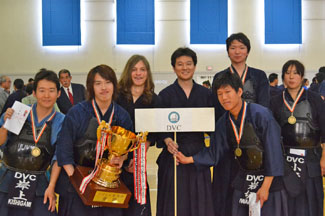 Kendo is a form of Japanese martial arts of swordsmanship with hundreds of years of tradition. There are many dojos (practice gyms for kendo) in the Bay Area, and many schools, most of which are four-year universities, have a kendo club. UCLA has about 40 active participants.

Sixteen teams competed in the UCLA tournament. DVC was the only community college to participate, and DVC and Soka University of America (sister school of a Japanese university) were the only non-University of California schools to compete.

This year Tatsuya Iwakiri, Anna Ono, Akihisa Kishigami (all second dan), Kentaro Hirai and Yuuki Kuroshima (both third dan) made up the team that won first place at the UCLA tournament.

In the round robin preliminary, DVC took first place, defeating all three opponents (UC Santa Barbara A team, UC Irvine, and SUA’s B team). In the final round, the team defeated SUA’s A team in the quarter-final, UC Riverside A team in the semi-final, and UC Berkeley A team in the final. The DVC team members won the gold medal and a trophy with a score of 5-0.

Anna Ono also won second place in the newly-created women’s division. She lost only in the final match to a player who won the non-gender individual tournament last year.

Woohyuk Lee and Timothy Connor competed in the individual kyu (before-the-black-belt stage) division. Lee, who has the first kyu (one step below the black belt) won twice and advanced to the quarter final. Though Connor did not win his first match, club adviser Akihiko Kumakura said that as the only English native among the participants, Connor dealt with most of the managerial side of the tournament, and without his hard work, the DVC Kendo Club might not have been able to participate in the tournament.

After all the dan holders transferred in 2011, Hirai, as captain, kept the club going. In 2012 the club welcomed four dan holders, and formed a team of very skilled kendoists.

Kumakura said, “I am really proud of all the team members. They have once again spread the name of Diablo Valley College in Southern California.”