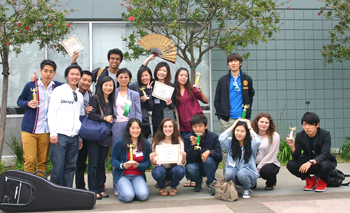 The contest, held at Lincoln High School in San Francisco, is the largest of its kind in the country. This year there were 82 judges and 672 registered contestants from 39 schools who came from all over the Bay Area. The contest is held by the Chinese Language Teachers Association of California (CLTAC), one of the largest associations in the United States and a nonprofit organization whose goal is to promote Chinese language teaching and learning in California.

The CLTAC currently has about 400 active members in more than 130 affiliations in California, including universities, colleges, institutes, high schools, middle and elementary schools.

The 10 DVC students who won awards:

Professor  Sheree Lin, head of DVC’s Chinese program, congratulates all the students who participated. She also thanks Tian Yuan and Wenrui Chen, tutors; Lily Miao, the group’s speech consultant; Wen Bi Yuin and Sun Xiaojing, Chinese instructors, and the foreign language department and the Applied and Fine Arts division for their support.