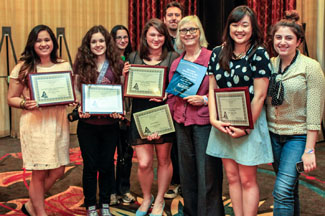 Six DVC journalism students won awards at the state Journalism Association of Community Colleges (JACC) state convention in Sacramento April 12-14. Most were among eight students who attended the convention with their adviser, Mary Mazzocco.

Samantha Chiu, Rachel Ann Reyes, and Julia Kinkela won third place for on-the-spot audio soundslide project. Over the course of two days, the students had to find a story on the CSU-Sacramento campus, take photos, record audio, and edit the sound and images into a three-minute multimedia story.

“I think these awards reaffirm that The Inquirer is moving ahead in providing students with the kinds of skills they need in the new media environment,” Mazzocco said.

As to her own award, Mazzocco said, “It was a surprise and a real honor to win the award, which usually goes to someone who has significantly contributed to the advancement of journalism education, not just at one school but statewide. I hope I can live up to it!

“Paul DeBolt at Contra Costa College and Cindy McGrath at Los Medanos College have won the award in the past,” she continued, “so the district now has a ‘trifecta.’”