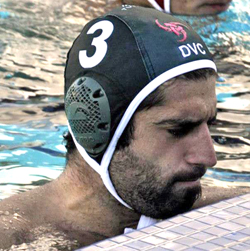 He’s a champion water polo player, a lover of math, a former member of the Israeli military, a well-traveled young man, and–at only age 25– a very interesting DVC student.

Ori Raz grew up in Kiryat Tivon, Israel. He started playing water polo at age 13 with his hometown team, “Hapoel Tivon.” He made it onto the Israeli 19-and-under national team at the age of 15, played with the National Team at age 16, and by age 18 was captain of the National Team.

When he was just 14, Ori came to the U.S. with his water polo club for a tournament in southern California, and later came again with the National Team, this time to Miami. He visited twice more for short vacations with his family and yet again on his own in 2011 as he traveled throughout the United States for three months.

Ori joined the Israeli military at age 18, serving for three years, and was able to play water polo while in the service. However, after injuring his shoulder at age 19, he went through a surgery that doctors said would prevent him from ever playing water polo again. It took a long four years of recovery, but Ori got into the water again and started to play, gradually getting back into the game. After his military service ended, Ori traveled the world for six months, starting in South America, then moving on to Central America and then to the U.S.

He has been to more than 25 different countries in his life, some with the Israeli water polo team, and others with family, friends and girlfriends.

“The most amazing experience was six months of traveling by myself in South and Central America,” Ori said. “I started in Lima, Peru, then spent one month in Colombia, then two weeks each in Panama and Costa Rica, and finally the US for three months. I got to see some of the world’s most beautiful places during my travels: a small village in Colombia right next to the ocean, where kids were playing soccer bare-footed on a gravel field, and the only power sources for the people were generators. Yet the native people in the village were some of the happiest people I have ever seen in my life!  I also got to see the complete opposite– some of the richest areas and people in the world, in Beverly Hills.

“This was a life-changing trip,” he continued, “and it helped me put life in a different perspective. It showed me that not everyone gets an equal chance, but that some people are just happy with the simple things in life.”

After he had gotten back into playing water polo, a friend who had played water polo at DVC contacted him and asked if he wanted to come and play at DVC. Just a few months after that, in the fall of 2011, Ori enrolled in classes at DVC and joined the water polo team. He has done nothing but excel.

In the 2011 season, Ori was the DVC, Big 8 Conference and Northern California MVP, and was named to the All-American, All-State and All-Conference first teams.

In 2012, he was again the DVC, Big 8 Conference, and Northern California MVP, as well as All-Conference and All-American first teams. He also was the DVC team captain that year, and the team finished second place in California, the best finish for a DVC water polo team in the college’s history. “We had an amazing team!” he said. “Amazing friends and amazing coaches!”

But it is in the field of math where Ori really wants to excel.

“My educational goal is very straight-forward,” he explained. “I want to get as perfect an understanding of math as possible. It is my belief that in order to better understand what is going on around us in the world, we need to understand the world’s language– math.”

It was not always that way.

“When I was younger, during elementary school, I remember I really enjoyed math,” Ori said. “I used to calculate simple stuff with my parents during long car rides, and generally had a very positive view of the subject. But by the time I arrived at high school this attitude had changed completely. I thought that math was the most boring (and hard) subject you can learn. I figured this is just the way things are– Math is boring.

“I was wrong, but I had no idea I was wrong until I arrived at DVC and met my first math professor here, Professor Holly Kresch. She re-ignited the old feelings I had for math as a child. I finished high school with the lowest level of mathematics possible. Yet even though I had six years of separation between the time I finished high school and the time I started college, I got A’s in all my math courses. When I decide I want something, I will work as hard as I can to get it, and usually it works.”

Ori had been planning to major in economics, he said, but fortunately– and thanks to Professor Kresch– he changed to mathematics.

The whole experience, he explained, made him think about how many other people out there felt the same way he did about math. What could he do to make them see math the way he does now? He currently is working on writing a book, geared toward much younger students and their parents, to help children access math even before they are able to read, and hopefully to develop in them a curiosity for the subject and a desire to explore the world of science.

“Then came the complicated part,” he said. “I had an idea for a ‘game’ that will in the book, to make it more fun, but obviously this is not enough. I consulted with Professor Kresch and explained my desire for the book, and she has helped me to achieve a better level of understanding of math and how to teach it.”

As for his educational plans, Ori has applied to and hopes to transfer to MIT in the fall.

“Being at DVC is actually what changed my course in life,” Ori said, “and set me on my current path. I was lucky enough to be a student of Professor Bruce Reeves and an amazing math teacher (Holly Kresch). Both care greatly about their students as persons and not only as ‘grade producing machines.’ Professor Kresch is the reason I changed my path, and Professor Reeves has helped me with my English abilities as his student, and is now staying in touch and helping me achieve my goals.

“What if a kid in a Colombian village who plays soccer bare-footed has the potential to become the next Einstein, but will never know it because he will never have the chance to see the beauty that math and science hold?” he asked.

“I want to expand the number of young children who are exposed to math in a beautiful and attractive way, so that in the future the world will have a greater number of scientists and mathematicians who will push mankind to new limits.”