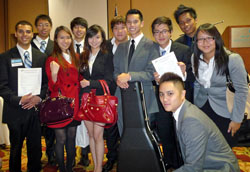 Thirteen DVC students who are members of the Phi Beta Lambda business organization attended the state fall business leadership conference in Sacramento in November, accompanied by adviser Carolyn Seefer. The DVC students excelled in the statewide case study competition, which is a highlight of each conference.

The case study competitions were held in the afternoon. This year, each college was allowed to send two teams of four students each to compete in two different case study competitions: Entrepreneurship and Marketing Strategies, and Effective Competition and Human Resources Empowerment Programs. According to Seefer, “Teams were given their Harvard Business School case study materials a few days before the conference, and they worked hard to prepare.”

During the competition each team had seven minutes to clearly, concisely and persuasively present its case study to the panel of judges, made up of local business people. They had to define the case study problem, present solutions, make recommendations based on solid analysis, and defend those recommendations.  They also had to answer questions posed by the judges.

The teams from all 15 colleges and universities presented their case studies. The judges announced first- and second-place winners for each case during the closing session.

“We should all be extremely proud of these students,” Seefer said. “They worked hard, took their job seriously, and represented DVC well throughout the conference.”