The project, which was started by Professor Delmar Larsen at UC Davis, recently received its first major funding – a $250,000 grant from the National Science Foundation – to a consortium that includes UC Davis, Sonoma State University, Diablo Valley College, Contra Costa College, Hope College in Michigan, and the University of Minnesota-Morris. 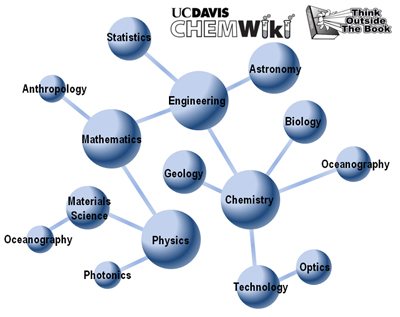 Its purpose is to create a single, flexible resource for chemistry education that is free for students to use, and flexible enough to target students at multiple levels of education.

The approach underlying the Dynamic Textbook Project is to develop or collect, integrate and vet open-access or donated content within a unified Wiki infrastructure on the web, while ensuring both ethically and legally that all content has permission for use and is properly attributed.

According to Rusay, DVC and CCC also have a complementary individual grant for $56,114 for two years, through May 2015. The immediate focus here is to replace the current general chemistry textbook that is being used by the Chemistry Department at DVC with the ChemWiki. Once completed, they will undertake to add the next four of the top five general chemistry textbooks used nationally.

Rusay is managing the project, doing the budgeting, administration, recruiting and supervising student contributors, as well as editing and authoring. Smith, emeritus faculty who is retired from CCC, is advising and consulting on the project. Johnson is contributing to and assisting in the project. Their focus is in general and organic chemistry.

Faculty contribute content and organization, while students contribute through tasks such as copy editing, developing worked-out examples and problems, and assisting faculty authors to ensure that concepts are explained in language that peers can understand.

The DVC-CCC grant supports four former DVC students (three at UC Berkeley and one at UCLA) and three current DVC students who are being paid stipends to work on the project. The project is actively recruiting other DVC and CCC students who have successfully completed one year of general chemistry or are currently enrolled in the second term.

“In addition to assisting in the general chemistry textbook objectives,” Rusay said, “the employed students are adding content for other lower division college chemistry courses, including General, Organic and Biological Chemistry (CHEM-109 at DVC, primarily for nursing, dental hygiene and other health-related careers), and Organic Chemistry (CHEM-226 and 227 at DVC, primarily for science, engineering and pre-med majors). They also are doing quick edits of the ChemWiki submissions that have already been incorporated into the ChemWiki Core.”

“Furthermore,” Larsen said, “rapidly rising undergraduate fees and textbook costs are impeding access to higher education for many students, and also have a defeating effect on many under-served, at-risk students.”

A single general chemistry textbook for undergraduates can cost hundreds of dollars, with new and more expensive editions appearing regularly. Most of the content, explained Professor Steven Farmer, another contributor from Sonoma State University, is well established and is standardized by the American Chemical Society. Some of the material hasn’t changed in decades, if not centuries, making it unclear how the increasing cost is justified.

That’s where the Dynamic Textbook Project comes in. It is made up of seven pseudo-independently operating and interconnected STEMWikis that focus on augmenting education in separate STEM (Science, Technology, Engineering and Mathematics) fields. ChemWiki is one of these. The STEMWikis are practitioner-developed, practitioner-adopted and practitioner-evaluated, with the end user in mind at every stage.

“All the content we need for the first two years of undergraduate chemistry already exists online– so we went out and asked for it,” Larsen explained. When authors responded positively, Larsen and his student wiki-editors worked to adopt the material into the wiki format.

“The ChemWiki is not a textbook,” Larsen explained. “It is a free ‘textbook environment’ capable of supporting multiple chemistry textbooks within a centralized system.”

This term, students in two of the 10 first-term general chemistry sections (CHEM-120) at DVC were given the option to use either the publisher’s text or the ChemWiki, or use both as their principal text materials.

The first ChemWiki pilot for a third-quarter general chemistry course at UC Davis is planned for spring 2014 at UC Davis, with a 400-student enrollment. Half of the class, about 200 students, will use the standard textbook as their principal reference. The rest, hearing the same lectures from the same professors and studying the same material, will use the ChemWiki.

The results will be independently evaluated by researchers from the UC Davis Center for Education and Evaluation Services.