Two Diablo Valley College students currently are ranked 4th and 5th in the state in the National Aces cyber competition.

According to instructor Doug Spindler, the cyber competition is like a video game where the competition consists of figuring out the damage a cyber attacker is doing to a computer system, and scoring points on how well they do. The situations and attacks in the competition are from actual cyber attacks. 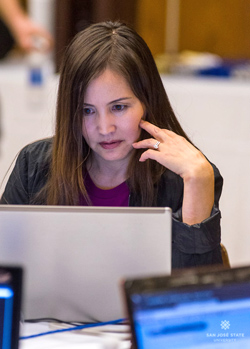 Students compete online from home or school. The competition is sponsored by the SANS Institute, a private U.S. company that specializes in Internet security training, and the Center for Internet Security, a nonprofit organization focused on enhancing the cyber security readiness and response of public and private sector entities.

Bayarmaa Havel (right), who is originally from Mongolia but now lives in Concord, is a Computer Network Technology student at DVC.

The second portion of the competition has players testing computer systems for weaknesses. Players score points when they identify computer accounts with no passwords or find accounts with weak passwords and “cracking” them. Once inside, players score additional points for discovering other weaknesses a web site might have, and for discovering other insecurities such as unprotected files which contain such sensitive data as credit card numbers or lists of email addresses.

“The competition is for students of all skill levels and experiences,” Spindler said. “And just like a video game, there’s a lot of strategy involved for scoring the most points.”  DVC has had 33 students compete so far.

“The Cyber Aces security competition was created to prepare students for IT security jobs,” Spindler said. “There is currently a critical shortage of skilled professionals in the information security industry. Students who score well in the competition are receiving offers for high-paying security jobs, and DVC has become the college to attend for cyber-security training.”