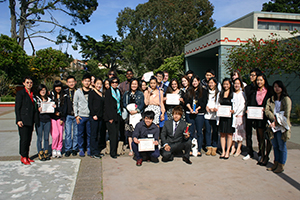 Fourteen DVC students competed in the 13th annual Chinese Bridge Proficiency Competition for College Students, held at San Francisco State University. It is organized by the Confucius Institute at SFSU (CISFSU) and is sponsored by the Hanban/Confucius Institute Headquarters in Beijing, China, and the Education Office of the Chinese Consulate in San Francisco who, along with CISFSU’s partner institution, the Beijing Normal University, are committed to the promotion and growth of Chinese language teaching and learning in northern California.

In addition, Diablo Valley College also won the Best Organization award for its efforts to promote and improve Chinese pedagogy in northern California.

The contest, hosted by the Chinese Language Teachers Association of California (CLTAC) and held at Lowell High School, attracted Bay Area Chinese students of all levels and ages. It is the largest speech contest of its kind in the country, and drew students from 52 schools as well as 86 judges.

The 14 DVC students who won awards are:

CLTAC, with about 400 active members in more than 130 affiliations in California– including universities, colleges, institutes, high schools, middle and elementary schools– is one of the largest associations in the United States. It is a nonprofit organization whose goal is to promote Chinese language teaching and learning in California.

The Chinese Speech Contest was created in 1962 by K Y Xu, Leon Chen, and Maurice Tseng from CSU-San Francisco and is open to all Bay Area Chinese language students from elementary to university level.

Professor Sheree Lin, head of DVC’s Chinese program, congratulates all the students who participated, and gives special thanks to speech coach Lily Miao, teacher Han Lu, and volunteers Yi Ting Hsu, Wendy Liu, Qicheng Cai, and Allan Chen, as well as to the Foreign Language Department and the Applied and Fine Arts Division for their support.