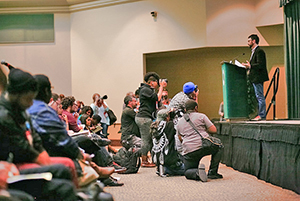 Spring 2014 editor-in-chief Rachel Ann Reyes and managing editor Ben Davidson also won first place for tabloid-size front page design. Reyes was the first student to graduate with a Journalism AA - Transfer in May and is now at UC Santa Barbara. Davidson plans to enter San Francisco State in the spring.

Ian Hill, the executive producer for digital and social media at News10 in Sacramento, was the keynote speaker. He advised students that serving up some silly, viral stories can be a good way to attract audience members who will stick around for more serious news.