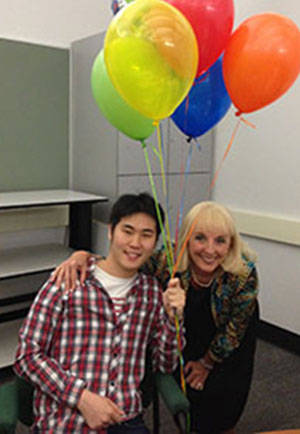 Jinsung “Eddie” Kim, an international student from South Korea at Diablo Valley College, has been awarded a highly-prized Jack Kent Cooke Foundation Undergraduate Transfer Scholarship. He was one of only 85 student winners from throughout the country selected from 3,705 applicants. He will transfer this fall, though he is unsure where. He has been accepted to both the UC Berkeley, Haas School of Business (where he would major in business administration) and to Brown University (concentration in business, entrepreneurship and organization).

Kim, who lives in Pacheco, has been a student at DVC since he enrolled in August 2012. He attended high school in Canada for about a year when he was 16, he said, “but I dropped out of high school due to my family circumstances. I did not give up on my education and received a GED certificate from Korea in 2005. It took me seven years from obtaining my GED to come back to school. Returning to school after a seven-year absence was intimidating yet the most fulfilling experience in my life.”

At DVC, Kim was vice president of the DVC Phi Beta Lambda (PBL) chapter (business club), the largest club on the DVC campus and the third largest PBL chapter in the nation, with 169 registered members. “I was part of DVC’s PBL for two years,” he said, “and during that time I met countless incredible individuals who believed in me, supported me and became my friends. PBL is my home away from home and everyone in PBL is my family.”

Kim also has been mentoring high school students for two years in a program called Young Entrepreneurs at Haas (YEAH). “YEAH is a program that helps under-resourced Bay Area youth to pursue higher education,” he explained. “I love this program because I see myself in the kids I mentor. My hope is to be an inspiration for them. I want to share my story and tell them to never give up on pursuing education no matter how many obstacles they encounter on their journey.”

The Jack Kent Cooke Foundation Undergraduate Transfer Scholarship is the largest private scholarship for two-year and community college transfer students in the country. The Foundation provides as much as $30,000 a year for up to three years to the nation’s best low-income community college students seeking to complete a bachelor’s degree at an accredited college or university.

This year’s cohort is the largest in the program’s 13-year history, with applicants representing 737 community colleges from 48 states, two U.S. territories, and the District of Columbia.

Scholars were selected based on high academic ability and achievements, persistence, leadership, and financial need. The average GPA of the incoming class is 3.98 and the Scholars come from families with an average adjusted gross income of approximately $25,000. They plan to attend competitive institutions such as Georgetown, Cornell, Stanford and Columbia, as well as numerous selective state universities.